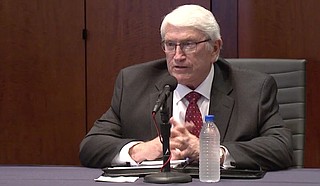 HOLLY SPRINGS, Miss. (AP) — The Mississippi Department of Corrections is taking over operation of Marshall County Correctional Facility, a prison that has been privately run since it opened 25 years ago.

“It is difficult to hire that close to Memphis,” Cain said.

The commissioner said the Department of Corrections raised the pay at the Marshall County prison to $15 an hour, which MTC could not do. He said the company runs numerous prisons across the country, and all have a consistent rate of pay.

“They couldn’t raise pay at one facility and not at others,” Cain said.

The Department of Corrections tried to rehire as many of the MTC workers as possible, he said. Because of state hiring requirements, former employees had to reapply and be interviewed and vetted again.

As of Monday, the Marshall County prison had 89 employees but will need more as the facility adapts to its new mission, he said. Officials plan to reduce the number of prisoners and increase reentry training.

He said MTC had agreed with the previous Department of Corrections administration to house maximum-security prisoners.

“It was not designed for maximum security, so we removed those,” Cain said.

Cain said the prison will shift its focus to helping inmates return to society.

“We want to focus more on reentry training, including teaching the prisoners coding, which is highly desirable in the computer industry right now,” Cain said.

MTC was contracted to house 900 inmates but lacked the staff to support that many. The Department of Corrections took over the facility Sept. 13. After moving the maximum-security and other prisoners, the number was down to 775 Monday. Cain said he’d like to decrease the prison's population to about 500.

The Marshall County prison sits on 42 acres (17 hectares) on the north side of Holly Springs, with a fence around 17 acres (6.9 hectares) of that. It opened in 1996 and was designed to house only male prisoners.