Muralist Aspires to Promote Peace and Spark Reform through Art 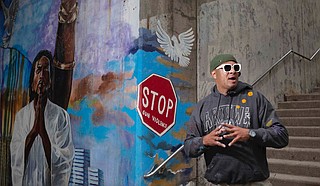 When Kyle Holbrook was 14, he lost his basketball teammate and friend to gun violence. A few months later another friend met the same fate. As the years progressed, Holbrook watched more of his family and friends succumb to the same outcomes. At last count, the Pittsburgh native knew 45 victims of gun violence.

For many years, he masked his pain and loss in his art, using it as a distraction. However in 2002, he realized that he could channel that energy in a different way. He created the Moving Lives of Kids, or MLK, mural project. The organization’s mission is to not only bring awareness to gun violence across the country but also to provide opportunities for young people to find positive avenues and opportunities and to use public art to educate, inspire and enhance the quality of life in communities.

“It seems like people are desensitized,” Holbrook says. “It happens so often, and we are inundated with so much information in the media and on social media that people forget. I just didn’t want people to forget.”

This year, MLK’s board chose Jackson as the site for its latest mural opposing gun violence due to its blossoming arts community and its uptick in crime. The metro city has already witnessed more than 100 homicides this year. The mural titled “Peace Jackson” can now be found in downtown Jackson on Pascagoula Street. Added as an aesthetic contribution to an existing mural, the piece features a hand making the peace sign. It includes the colors orange, the color for gun-violence awareness, and purple.

“I wanted “Peace Jackson” specifically to be simple, like a contemporary street arts style so that it is easily understood that it is obviously talking about peace,” Holbrook says.

Growing up in Pittsburg’s Wilkinsburg neighborhood offered the artist a firsthand look at gangs and crime. Even with strong, positive family influences who nurtured his creative spirit, he still found himself involved in gangs. He attended college at the Art Institute in Pittsburg and earned a bachelor’s degree in graphic design. While there, he fathered a daughter and realized that he had to make some life changes. He began painting on daycares and stores in the area and soon had a group of youth working with him on weekend evenings and nights. He realized that the projects provided an alternative to the poor choices offered to youth today, and the idea of MLK was born.

The 43-year-old has now traveled to 40 different states and 43 countries creating 68 murals to raise awareness about gun-related crime.

“People think it's a regional issue when you are going through it or you lose someone, but it's really been what’s going on all around the country,” he said. “Every city that I go to, it’s been a shooting the day before or the day of. I think now more than ever is the time to capitalize off the popularity of public art and spread the message.”

The initials MLK are not by chance. The first mural was painted in Pittsburgh on the MLK busway. The organization’s design follows Martin Luther King’s dream of bringing people of all colors together and working to bolster the community. The group employs hundreds of youth of all races each year to take photos, prepare the sites and assist Holbrook.

Holbrook has been commissioned to complete a mural in Tampa for the first game of this year’s NFL season to commemorate Tampa Bay’s Super Bowl win. Throughout his art tour of creating murals across the country, Holbrook hopes that the murals spark an understanding of the need for gun reform.

“My uncle was one of the first black colonels in Vietnam and he knows less people than I do that have been murdered,” Holbrook said. “I just don’t think that everybody realizes the depth and dire need for gun law reform and gun violence solutions. The hope is that not only will families see (the murals) and know that their loved ones aren’t forgotten but that other people will see it and think about solutions.”

You can find more of Holbrook’s work and ways to get involved at mlkmural.com.