Ink Barely Dry on Budget as Mississippi Starts New One 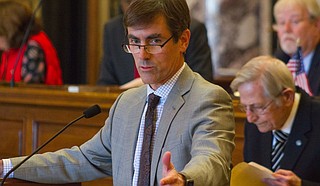 Less than three months into the current budget year, Mississippi legislators are starting to plan for the next one. Photo by Stephen Wilson

JACKSON, Miss. (AP) — Less than three months into the current budget year, Mississippi legislators are starting to plan for the next one.

The Joint Legislative Budget Committee holds a public hearing Friday as part of the long process of deciding how the state will spend billions of dollars during the year that begins July 1.

Legislators face three big questions: Will Mississippi enact another teacher pay raise in the coming year, as many politicians have promised? Will the Republican-controlled state Legislature phase out the state income tax? And how will the state spend hundreds of millions of dollars sent by the federal government for pandemic recovery?

Republican House Speaker Philip Gunn has said for months that he wants Mississippi to phase out its income tax, pushing this as a way to make Mississippi more competitive with states that don't tax income, such as Texas, Tennessee and Florida.

Gunn's effort fell short in the Republican-led Senate earlier this year. Some critics rejected the accompanying proposal to increase sales taxes, saying that would dig deeper into the pockets of people with modest incomes. Other critics said phasing out the income tax would hobble Mississippi's budget and make it more difficult to afford a teacher pay raise or to pay for big-ticket items such as expected court-ordered improvements to the state's mental health system.

Mississippi has long had some of the lowest teacher salaries in the U.S. During the 2021 session, legislators passed and Republican Gov. Tate Reeves signed a bill giving $1,000 raises to most teachers and $1,100 to some. Those raises took effect when the current budget year began in July.

Senate Education Committee members met last week to discuss teacher pay. According to the Southern Regional Education Board, the average teacher salary in the U.S. for 2018-19 was $62,304. For Mississippi, the average was $45,105, which was about $8,200 below the Southeastern average.

Mississippi received more than $903 million in May from the federal pandemic relief package Congress approved this year, the first half of the state's allocation. Mississippi legislators were already finished with their 2021 session before the money arrived, and they voted to delay spending decisions until they return to the Capitol. The next regular session begins in January, and Reeves shows no sign of calling a special session before then.

Several state agency directors will present their budget requests during Friday’s hearing in the Woolfolk state office building near the Capitol. The 14-member Budget Committee will release its initial set of spending recommendations in December. The governor will release his own budget ideas before the session begins.

Legislators are likely to revise the recommendations before all 122 House members and all 52 senators have a chance to vote on final spending plans before late March or early April.