Due to Garbage Contract Dispute, Environmental Crisis Looms in the City of Jackson 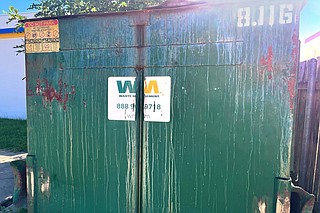 Waste Management Inc., a national company based in Houston, Texas, has handled waste disposal for the City of Jackson for 35 years. Its latest contract expires on Sept. 30. Due to contract disputes, the capital city may not have a new contract in place for garbage pickup by then. Photo by Kayode Crown

The Jackson City Council recently reversed the declaration of emergency that Mayor Chokwe A. Lumumba declared on Friday, Sept. 17, after pushing for a different vendor due to claims of poor service and treatment of employees.

The emergency declaration would have enabled the mayor to circumvent the standard contract procurement rules to onboard another vendor to provide a stop-gap garbage disposal service to more than 50,000 Jackson households.

The mayor felt it was necessary to make the emergency declaration after negotiations with Houston, Texas-based Waste Management, the current contract holder, fell through.

Waste Management, which has operated for 35 years in the city, was the second choice after three companies responded to the City of Jackson’s request for proposal in March. The Woodlands, Texas-based FCC Environmental Services and New Orleans, La.-based Richard’s Disposal Inc. were the two others.

FCC won the bid, but the Jackson City Council twice in August—Aug. 9 and 19—voted against the company, with the thorny issue being an increase in cost to city residents. Moving from $20.20 to $35 per week per household was too steep a hill to climb for the four council members, out of seven, who voted against approving the contract.

Though Council President and Ward 7 Councilwoman Virgi Lindsay twice voted for the contract, she cited mixed communication from the administration as a thorny issue at an Aug. 19 meeting.

“I think that there has been a tremendous amount of confusion around this (contract) and lack of clear and concise communication,” Lindsay said before the vote on Aug. 19. “And part of that, I think, has been because of the timeline. We have just been under a tight timeline.”

From that time, city residents started looking down the barrel at the possibility of no garbage disposal come Oct. 1 and the attendant risk of health and environmental disaster in the capital city with a population of more than 150,000.

After Aug. 19, the mayoral administration started negotiating with the other two bidders to stem off the possible danger. Richard’s Disposal Inc. said the time was too short for it to execute any plan. But the matter was not so simple with Waste Management.

The mayor leveled various allegations against Waste Management focusing on inefficiency, lack of job security and overworked employees, both in a Sept. 17 opinion piece and at a press briefing on Monday, Sept. 20.

“I do believe that having to enter into an emergency circumstance is difficult. It is not the alternative that I would have preferred,” Lumumba said Monday. “But I’d rather struggle through this while we put out another RFP than agree to an agreement that gives me trepidation, which we know is a company that we’ve tried to cure, or give them opportunity to cure the things that we’ve had problems with.”

Letters exchanged between Waste Management attorney Chase Bryan and the city attorney in charge of public works, Terry Williamson, provided insights into the differences between positions of the city administration and the company.

The crux was a 2002 Mississippi Attorney General’s opinion. In his Aug. 30, 2021 letter, Bryan argued that the opinion showed that once the City has put specific requirements in the request for proposal, it cannot later change them. Hence, he said, the City cannot move from a six-year contract to a one-year contract.

In his response on Sept. 13, Williamson said the attorney general’s opinion is just that—an opinion.

“In this case, the language of section 31-7-13 (r) is a better indicator of the meaning of that statute for purposes of the term of the contract and other provisions within the Request for Proposals,” Williamson wrote. “Under the current circumstances, it appears that the City and Waste Management disagree as to what is in their best interests with respect to the length of the contract.”

‘Waste Management will not provide a one-year proposal’

The company’s attorney attached testimonies from five Waste Management employees who shared positive experiences working for the company to the letter. “Waste Management will not provide a one-year proposal and instead requests the City follow its RFP and state law and consider Waste Management’s proposal for a six-year contract,” he added.

During the Monday press briefing, however, the mayor said he has a report of a temporary worker working for years for the company, describing it as “egregious.”

In a phone interview on Monday, Sept. 20, Waste Management Public Affairs Area Manager Buford Clark told this reporter that workers are happy with their jobs, and temporary workers choose to work a few days a week. He said the company can employ those who want the job full-time.

City attorney Williamson also focused on service complaints in his Sept. 13 letter, noting that “the solid waste division routinely receives from fifty to one hundred calls each day, most of which are about missed collections.”

Waste Management Public Affairs Area Manager Clark said, however, that the company only gets an average of four complaint calls a day from Jackson.

The Waste Management proposal that Bryan attached to the Aug. 30 letter showed that Waste Management offered $13.02 per household per month for a six-year contract for the current service level. There will be $3.70 for additional services, including setting up a call center dedicated to field complaints from the people, procuring three trucks that will pick up illegal dumping throughout the city five days a week.

The Jackson City Council held a special council meeting on Tuesday, Sept. 21, and Wednesday, Sept 22, to address the garbage-contract issues. On Tuesday, the mayor explained his administration’s steps to ensure that, come Oct. 1, the city is not without garbage collection. He said he had executed an emergency contract with a company he did not name to provide a temporary garbage disposal contract to the city.

At the meeting on Wednesday, the city council rescinded the mayor’s Friday emergency declaration, thereby canceling the emergency contract.

Ward 1 Councilman Ashby Foote told the Mississippi Free Press on Sept. 22 that the emergency contractor’s name is “National Waste, ” a two-week-old company. A search of the Mississippi Secretary of State’s business listings revealed that National Waste Systems LLC was created on Sept . 12, 2021, two weeks ago, with business ID 1302874.

The principal office of the new company is at 5520 Highland Drive in Jackson. Lee Rodgers Bush Sr is the organizer and registered agent. Jackson-based members are Socrates Garrett Enterprises Inc. and Waste Consulting Systems. SRS Inc. is from Gallatin, Tenn.; Kingdom Transportation & Trucking LLC is from Crystal Springs, Miss.; and Cooper & Associates LLC is from Brentwood, Tenn. They are the remaining members.

“We were very concerned about (how young the emergency contractor is), and we didn’t feel like the emergency qualified under state statute as an emergency that would give the mayor special powers to sign up a contract like that,” Foote told the Mississippi Free Press in a phone interview. “So we voted on that; we voted to rescind the emergency proclamation which nullified the contract.

“So the contract is no longer in place. Now the ball’s in the mayor’s court as to negotiating a contract that would go into place after October the first.”

Before the vote on Wednesday, the mayor explained his efforts to stand up a contract and said the city council will have to come up with a way to pick up the trash if they rescinded the order. “And so I want to make it clear to the residents of Jackson, if this emergency has been rescinded, then it is on the council to determine how trash is picked up, … I want the council to tell the residents how their trash is going to be picked up,” he said.

As the clock continues to tick, it is unclear what will happen to avert the looming disaster of unpicked trash in the capital city.

After the council’s vote on Wednesday to rescind the mayor’s emergency declaration, Council President Lindsay provided a press statement, apparently in response to the mayor’s challenge that the council has to look for a way to pick up the city’s garbage come Oct. 1.

“The current vendor that has provided solid waste collection services for decades has offered to continue those same services at least through the month of October at the same rate specified in the existing contract,” she read. “The council is waiting on the mayor to determine whether he will accept that proposal.”

“The mayor has challenged the council to develop a plan for trash pickup. I believe we have one,” she added. “The mayor has before him a reasonable option that is in the best interest of the citizens of Jackson. That option is available to provide continuous, uninterrupted services without the hiccups that come with bringing in a new company that has been in existence for a very short period of time.

“Moving forward with this option also gives the mayor additional time to negotiate a long-term agreement.”

The mayor later on Wednesday evening responded to the council president’s statement. “I want to make a couple things clear: In an attempt at negotiations, Waste Management never offered a short-term contract or the proposed one-month solution that Councilwoman Lindsay speaks of,” the mayor wrote in an emailed statement. “When my office offered them a one-year contract, they turned it down. Instead, they demanded a long-term one, and this occurred repeatedly.”

The mayor said negotiation with Waste Management is outside the council’s authority and the emergency declaration that it rescinded is the only thing that would have enabled him to make the kind of contract the council president now proposes.

“More importantly, I am now legally prohibited under state law from giving Waste Management any contract—unless it is under either the bid process or a declared emergency,” he added. The mayor accused the council of “contract steering,” after rejecting the contract with FCC Environmental Services twice.

“A majority of the council—in their apparent zeal to side with Waste Management – has put my office in an impossible situation,” he added. “Waste Management appears to be calling the shots, and the council is working with the company to give the appearance they are negotiating in good faith. The ball is now in their hands.”