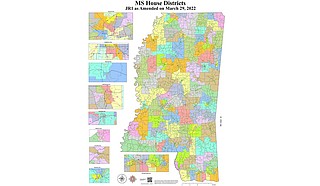 The Mississippi House and Senate on Thursday approved each other's redistricting plans that are likely to maintain Republican majorities in each chamber. Photo courtesy Mississippi Automated Resource Information System

JACKSON, Miss. (AP) — The Mississippi House and Senate on Thursday approved each other's redistricting plans that are likely to maintain Republican majorities in each chamber.

The 122 House districts and 52 Senate districts are updated each decade to account for population changes shown by the Census.

Two House districts in areas with stagnant population in north Mississippi are being moved to areas with growth — one to DeSoto County and the other to Harrison County. In the Senate, one district is being moved from southwestern Mississippi to Rankin and Smith counties near the metro Jackson area.

The redistricting plans were revealed Sunday, after legislators had spent months working on them in public hearings and private meetings. Each chamber approved its own plan Tuesday. Without debate Thursday, the House approved the Senate plan and the Senate approved the House plan.

Republican Gov. Tate Reeves does not have the power to sign or veto the plans because legislative redistricting is done by resolutions rather than bills.

Unless someone successfully sues to challenge the redistricting plans, the new districts will be used in the 2023 elections.