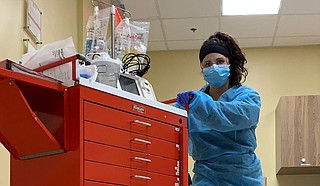 The bill recently approved by both chambers of the state Legislature would permit the construction of “freestanding” emergency rooms in rural counties. The freestanding ERs would not have to be attached to hospitals.

The bill is headed to Gov. Tate Reeves’ desk for review. If Reeves signs the bill into law, it could lead help some rural counties to build emergency rooms, The Northeast Mississippi Daily Journal reported.

The bill would create a pilot program that allows a freestanding emergency room in counties where none exists. The legislation limits the number of these facilities to five statewide so lawmakers can see whether the program works.

Chickasaw County, in northeast Mississippi, has long fought to get an emergency room.

“It’s a huge need in our area,” said state Sen. Ben Suber, a Republican from Bruce.

The Chickasaw County town of Houston has just one medical facility — Trace Medical — which offers limited hours and care. It shut down its emergency room in 2014, citing low profits.

The general idea behind a freestanding facility is that patients could seek enough emergency care from a licensed physician to be stabilized and then moved to another facility for long-term treatment.

Traditional emergency rooms in Mississippi often struggle financially due to a variety of factors. However, a provision in state Medicaid laws allows emergency facilities without inpatient beds to receive a higher Medicaid reimbursement rate, elevating the chance that a freestanding ER could be financially feasible, the newspaper reported.