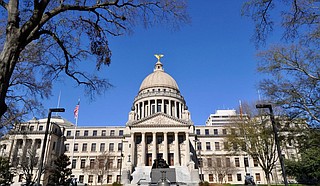 Mississippi legislators are returning to the Capitol on Monday with hopes of finishing their 2022 session. Photo by Trip Burns

JACKSON, Miss. (AP) — Mississippi legislators are returning to the Capitol on Monday with hopes of finishing their 2022 session.

They still need to finish passing a state budget for the year that begins July 1. The state-funded portion of the budget will be more than $6.2 billion. Legislators also will allocate billions of federal dollars, including money the state received from a federal pandemic relief package.

Republican Gov. Tate Reeves said Friday that he intends to sign a bill that will authorize Mississippi's largest-ever tax cut. On March 27, the House and Senate voted by wide margins to pass the bill that will reduce the state income tax over four years, beginning in 2023. Reeves has a Tuesday deadline to act.

“It’s a major tax cut that heads us in the direction of eliminating the income tax,” Reeves told reporters Friday at the Capitol. "Literally every Mississippian who pays income taxes in our state will have the opportunity to send less of their money to the government and the ability to keep more of their money.”

Supporters say a significant tax cut could spur economic growth and attract new residents to Mississippi, which was one of three states that lost population during the decade before the 2020 Census.

The legislative session started in early January, and it originally was scheduled to end Sunday. Final budget negotiations were delayed repeatedly because of contentious final discussions between House and Senate leaders over the tax cut plan.