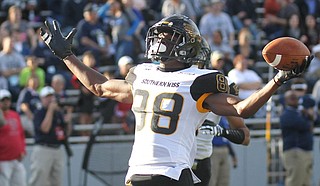 Both teams playing in Super Bowl LVI haven’t fared too well in big games past. The Cincinnati Bengals are 0-2 in the Super Bowl and the Los Angeles Rams are 1-3 moving from two different cities. Photo courtesy USM

Both teams playing in Super Bowl LVI haven’t fared too well in big games past. The Cincinnati Bengals are 0-2 in the Super Bowl and the Los Angeles Rams are 1-3 moving from two different cities.

Tom Brady stopped the next two Super Bowl trips for the Rams. In a bookend to his New England career Brady won his first Super Bowl and last as a Patriot against the Rams. The Patriots won Super Bowl XXXVI 20-17 and Super Bowl LIII 13-3.

Cincinnati has been on a fairytale run to Super Bowl LVI with wins over the No. 1 and No. 2 seeds in the AFC. Every postseason game for the Bengals has ended with an interception that ended the game or led to the game winning points.

The Rams are built to win now as they have traded several draft picks for a spot in this Super Bowl. Matthew Stafford is one of the biggest trades as he will start Super Bowl LVI instead of Jard Goff, who started Super Bowl LIII for the Rams.

Cooper Kupp is the star of the Rams show leading the NFL in just about every receiving category this season. He will be the main target for Stafford against the Bengals.

Two former LSU Tigers make the offense go for the Bengals. Heisman Trophy winning quarterback Joe Burrow and wide receiver Ja’Marr Chase. The two have picked up where they left off after terrorizing SEC defenses in route to the national championship.

Both teams feature solid defenses that are good at shutting down the run. The Bengals are the fifth best run stopping defense and the Rams are sixth in rushing yards per game.

Both quarterbacks come in as former number-one picks, and both played in the SEC. Both teams enter the Super Bowl as the fourth seed from their conference. The head coaches of both teams are under 40 years old.

Cincinnati feels like a team of destiny as one of the more unlikely teams to reach this game. The Rams were expected to be here with their win-now attitude with big trades.

Much like Brady and the Patriots win over the Rams, this game feels like a young Burrow will out shine the older Stafford. This game feels like it will end on a field goal and rookie Bengals kicker Evan McPherson is 12-for-12 in the playoffs.

This preview does not necessarily reflect the views of the Jackson Free Press. Read more sports coverage at jfp.ms/sports.