'My Baby is Dead,' Mom Says in Call for End to Violence 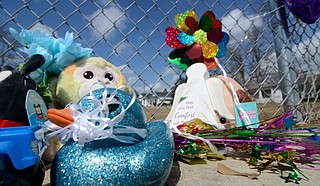 A Mississippi woman says local officials need to take immediate steps end senseless violence like the drive-by shooting that killed her 6-year-old son while he was playing with friends at a city park in McComb. Photo by Matt Williamson/The Enterprise Journal via AP

MCCOMB, Miss. (AP) — A Mississippi woman says local officials need to take immediate steps end senseless violence like the drive-by shooting that killed her 6-year-old son while he was playing with friends at a city park in McComb.

Kyoukius Washington, the mother of Oterious Marks, said her heart “aches for this city."

Washington gathered Monday with friends, relatives and school officials at Central Park in McComb, the Enterprise Journal reported. One person held an enlarged photo of her son, as others placed stuffed animals near the blood stain on the basketball court where the first-grader was shot Sunday afternoon.

“The crime rate is out of hand, and the recklessness and senselessness that got my son killed," Washington said. “I’m angry. I’m so angry."

Oterious had been playing with his brothers and friends as his mother watched from a nearby picnic table. Jody Ramee, Oterious’ 12-year-old brother, said he had seen someone with a gun at the park earlier but did not think the person would shoot. Then he saw a car come down a road near the basketball courts and someone started shooting. Jody watched a man standing next to him on the court get shot in the leg. Then he saw another bullet hit his brother. Another grazed Jody's arm.

Police Chief Garland Ward said the other people who were shot are 23, 18 and 17. Two of the four wounded were in critical condition, and one of them was airlifted to the University of Mississippi Medical Center in Jackson. The others had minor injuries and were released from the local hospital, Ward said.

Police arrested four suspects Monday — Bryan Cameron, 18; Yajari Jackson, 19; Bryceon Thompson, 18; and a 17-year-old. All face charges of capital murder and four counts of aggravated assault manifesting extreme indifference to human life. They remained in the Pike County jail Wednesday. It was not immediately clear whether any of them had lawyers who could comment on the charges.

Washington said the shooting should serve as an awakening for McComb.

“I don’t know who the target was in this situation, but I know for sure it wasn’t my 6-year-old son,” she said.

Oterious, whose family called him “Bull,” was a first-grader at Otken Elementary School.

“He was lovable. He was fun. He had a whole lot of character. He was a sweet boy,” Washington said. “He was so full of life.”