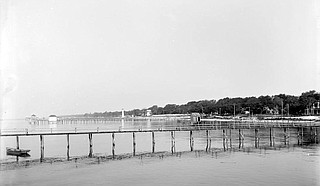 A Mississippi historical marker provides information about the wade-ins of 1959, 1960 and 1963, which led to opening the beaches to all people. Photo courtesy Detroit Publishing Co. via Library of Congress

BILOXI, Miss. (AP) — Ethel Rainey Clay was a high school junior when she and some classmates joined what they hoped would be a peaceful protest to integrate beaches along the Mississippi Gulf Coast.

Instead, white spectators attacked Black people who waded into the water on April 24, 1960.

“We had people to come out on the beach with bats, chains, bully clubs and everything, while the police officers stood on Highway 90 and watched all of this going on and turned their backs when we needed them the most. But we kept on," Clay, who is nearly 80, told WLOX-TV last week.

A Black physician from Biloxi, Dr. Gilbert Mason Sr., organized a series of “wade-ins” to challenge the exclusion of Black people from public beaches.

A Mississippi historical marker provides information about the wade-ins of 1959, 1960 and 1963, which led to opening the beaches to all people.

Hurricane Zeta knocked down the original marker in 2020, after it had stood for about a decade. People gathered Sunday to unveil the new one, made possible by Sigma Pi Phi Fraternity and the Mississippi Department of Archives and History.

“It sometimes gets emotional,” said Dr. John Kelly, who is with the fraternity. “Dr. Mason was a personal friend of mine. He was a mentor. I ate at his table many times. So, he was a very special man – very special to me – but even more than that, he was special to this community.”

Mason’s son, Dr. Gilbert Mason Jr., was among those who watched the unveiling of the new sign that recognizes the leadership of his late father.

“Having it reinstalled seems to be a nice focal point for inspiring youngsters and people who were participants in the original wade-in and the subsequent ones and are able to enjoy the beach every day now,” he said.

James Crowell, president of the Biloxi chapter of the NAACP, said the wade-ins are in the past, but they reflect what’s happening in the present.

“I know that a lot of people are proud about the fact to talk about the wade-in and what happened,” Crowell said. “It’s sad to say, though, we’re still fighting some of the same battles nowadays. We hoped that this would be history and not something that’s still happening.”