Mississippi Tax Revenue Jumps During 1st Half of Budget Year 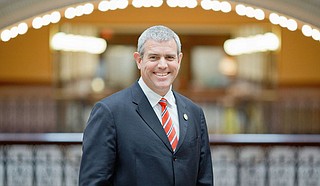 Mississippi government collected more money during the first half of this budget year than it did during the same period a year earlier. Photo courtesy Philip Gunn

JACKSON, Miss. (AP) — Mississippi government collected more money during the first half of this budget year than it did during the same period a year earlier.

With the robust collections, legislative leaders and Republican Gov. Tate Reeves say they want to approve some sort of tax cut during the three-month session that ends in early April. But, they are far from agreeing on details.

Discussions about a tax cut disintegrated last year when the Senate rejected a House plan, even though both chambers are led by Republicans.

Tax collections on gambling were up, but those from tobacco, liquor, beer and wine were down.

Tax collections from car tags decreased, possibly reflecting a drop in the sale of new vehicles during the economic uncertainty of the coronavirus pandemic.

Republican House Speaker Philip Gunn has said he will renew an effort to eliminate the income tax because he believes it will make Mississippi more competitive against Texas, Tennessee and Florida, which don't have an income tax.

“We believe we have a solid plan," Gunn said Tuesday, the opening day of the legislative session. "I believe that there is no downside to putting money back into the pockets of Mississippians. We think its benefits far outweigh any negatives from that.”

Republican Lt. Gov. Delbert Hosemann has not said whether he will agree to eliminating the income tax. Hosemann said during a speech Monday that the Senate Finance Committee chairman, Republican Josh Harkins of Brandon, is working on a tax cut proposal. Hosemann did not say when Harkins will release details.

“I believe that we'll have a tax relief package that will be very attractive to Mississippians,” Hosemann said.

During the 2021 legislative session, the House proposed phasing out the income tax and increasing other taxes, including the sales tax on some items. The Senate balked at what Hosemann called a tax swap.