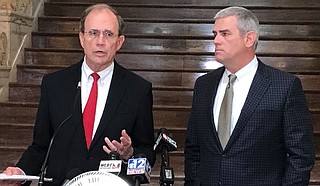 The Mississippi House is working on a proposal to phase out the state income tax, reduce the sales tax on groceries and increase the sales tax on many other items. Photo courtesy Delbert Hosemann and Philip Gunn

The House Ways and Means Committee on Tuesday passed the first version of the proposal, House Bill 531. The bill will move to the full House for more debate.

Republican House Speaker Philip Gunn has said eliminating the income tax is his priority this legislative session because he believes the change will make Mississippi more competitive with states such as Texas, Florida and Tennessee that don't tax income.

The House proposal would reduce the grocery tax from 7% to 4%. The change would happen over six years, beginning this July.

The proposal would also increase several taxes from 7% to 8.5% — an increase of more than 21% in that rate. That would include the general sales tax; the sales tax on alcohol; and the tax on music, games, cellphone ring tones and other products delivered electronically.

If the general sales tax were to increase by the proposed amount, for example, a person buying $100 of clothing would pay $8.50 in sales tax rather than the current $7. The increased tax amount would apply to in-person or online purchases.

Republican Lt. Gov. Delbert Hosemann, who presides over the Senate, has said he wants some sort of tax reduction this session, but he has not specified what kind.