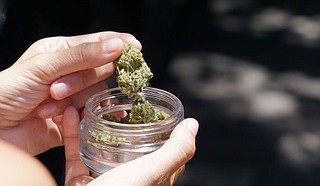 Mississippi senators voted Thursday to advance a bill that would create a medical marijuana program, sending it to the House for more work. Photo courtesy Elsa Olofsson on Unsplash

JACKSON, Miss. (AP) — Mississippi senators voted Thursday to advance a bill that would create a medical marijuana program, sending it to the House for more work.

One lawmaker started the debate by quoting Bob Dylan's “Everybody Must Get Stoned." It was a double reference to perceptions about recreational use of the drug and the criticism the lawmaker himself has faced from the governor.

Blackwell has been one of the lead negotiators the past several months on creating a medical marijuana program for Mississippi residents with debilitating medical conditions such as cancer, AIDS and sickle cell anemia. Advocates say patients want the drug for for pain relief and not to get high.

Republican Gov. Tate Reeves has said the bill would allow large amounts of marijuana to be sold, leading to broad recreational use of the drug.

A wide margin of Mississippi voters in November 2020 approved an initiative to allow medical marijuana, and a program was supposed to be created by the middle of 2021.

Six months after the election, the state Supreme Court invalidated the initiative by ruling it was not properly on the ballot because Mississippi’s initiative process itself was outdated. The ruling also left Mississippi without a way for people to petition to put issues in front of voters.

After the court ruling, legislative leaders appointed a committee to write a medical marijuana bill. That measure, Senate Bill 2095, would allow a person with a marijuana prescription to obtain up to 3.5 grams of the substance per day. That is roughly 3.5 ounces per month.

To illustrate the amount of marijuana people with could obtain with a prescription, Blackwell held up two packages of hemp and a hemp cigarette in a plastic container. He let senators pass the items around. Some refused to touch them. Others smelled the bags.

The bill sets taxes on the production and sale of cannabis, and it specifies that plants must be grown indoors under controlled conditions.

Senators rejected a proposal from Democratic Sen. Barbara Blackmon to allow outdoor growing. They also rejected a separate proposal from Republican Sen. Angela Hill of Picayune to allow only a few dispensing sites and to ban marijuana cigarettes through prescription.

The bill passed the 52-member Senate on Thursday with strong bipartisan support. Only five senators voted against it. House leaders have not said how soon that chamber could vote.