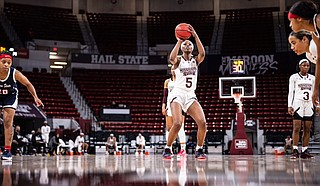 Just a few seasons ago, the Mississippi State University women’s basketball program had grown from ranking near the middle of the pack in the Southeastern Conference to national championship contenders.

The Bulldogs won their first SEC Women’s Basketball Tournament in 2019 and celebrated a thrilling victory over yearly power University of Connecticut in the NCAA Tournament. MSU reached unprecedented heights with back-to-back appearances in the Women’s NCAA Tournament National Championship Game in 2017 and 2018.

Things have slowly broken down since the Bulldogs lost to the University of Notre Dame in the 2018 title game. MSU would reach the NCAA Tournament in 2019 before bowing out in the Elite Eight.

Soon, Schaefer would leave to take the head coaching job at the University of Texas at Austin. His replacement Nikki McCray-Penson would leave after just a single season to focus on her health.

This Monday, Jan. 24, MSU star and leading scorer in the SEC Rickea Jackson announced she was entering the NCAA Transfer Portal. Jackson was averaging 20.3 points and 6.8 rebounds in the 15 games she appeared in this season.

Jackson won the Gillom Award, which is given to the best women’s basketball player at a four-year university or college in the state of Mississippi, in 2020. She was named to the SEC All-Tournament Team in 2020 as well. The coaches also named her 2020 SEC All-Freshman Team and Second-Team All-SEC.

The Detroit, Mich., native made her announcement on Instagram after spending three seasons playing for the Bulldogs. Jackson can’t enter the WNBA Draft this year because she won’t turn 22 in this calendar year. She will turn 21 in March of this year.

Jackson is taking advantage of the new transfer portal rule that allows players to transfer to another school one time without having to sit out a year. Jackson could transfer to UCONN, South Carolina, Texas or any other school and play right away.

MSU currently is 12-7 overall and 3-4 in SEC but will be without Jackson for the rest of the season. The Bulldogs will host the University of Texas A&M next on Sunday, Jan. 30, with tipoff at 3 pm on the SEC Network.