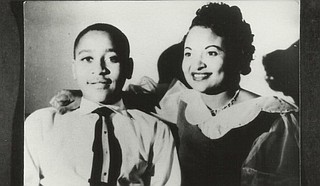 A Mississippi county has approved contracts for a sculptor to make and install a bronze statue of Emmett Till, the Black teenager whose 1955 lynching became a catalyst for the civil rights movement. Photo courtesy Simeon Wright

GREENWOOD, Miss. (AP) — A Mississippi county has approved contracts for a sculptor to make and install a bronze statue of Emmett Till, the Black teenager whose 1955 lynching became a catalyst for the civil rights movement.

Leflore County supervisors voted on the contracts Monday, about seven months after they initially agreed that the county would have a statue of Till, the Greenwood Commonwealth reported.

Installation is expected by about Oct. 1 at Rail Spike Park in Greenwood.

The Justice Department announced in December that it was ending its investigation into the killing of Till. The 14-year-old from Chicago was visiting relatives in the Mississippi Delta when he was abducted, tortured and shot after witnesses said he whistled at a white woman in a rural grocery store in Money. The small community is in Leflore County, about 10 miles (16 kilometers) north of Greenwood.

Mississippi has dozens of statues of Confederate soldiers at county courthouses, but it has few statues of Black historical figures.

State Sen. David Jordan of Greenwood secured $150,000 from the state last year to pay for the statue. A few weeks after Till was killed, Jordan attended the trial of Roy Bryant and J.W. Milam, the two white men who were charged. An all-white jury acquitted them.

The Justice Department reopened an investigation of Till's killing after a 2017 book quoted Carolyn Bryant Donham, who was married to Roy Bryant in 1955, as saying she lied when she claimed Till grabbed her and made sexual advances while she was working in the store. Relatives have publicly denied that Donham, who is in her 80s, recanted her allegations about Till.