'Bomb Cyclone' to Dump Snow from Mississippi to Maine 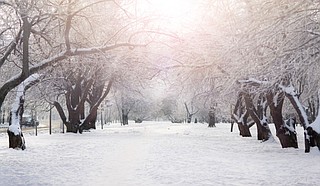 A powerful, late-winter storm combining rivers of moisture and frigid temperatures is expected to dump snow from the Deep South all the way north to the Canadian border over the weekend, forecasters said Friday. Photo courtesy Ndrey Bond on Unsplash

A powerful, late-winter storm combining rivers of moisture and frigid temperatures is expected to dump snow from the Deep South all the way north to the Canadian border over the weekend, forecasters said Friday.

The system is referred to by some as an ominous-sounding “bomb cyclone.”

“With this bomb cyclone, maybe what’s the biggest concern is how late in the season its coming and that it’s traveling over inland areas,” said Judah Cohen, a winter storm expert for Atmospheric Environmental Research, a commercial firm outside of Boston. And that’s bad news for plants that acted as if spring was here.

Many crops and plants in the Southeast have started to bud because of warmer weather until now and the freezing cold temperatures — maybe record low — that are expected on the back end of this bomb cyclone can cause some serious damage, Cohen said.

A bomb cyclone has nothing to do with explosions, except in how explosive a storm develops. It is when a storm intensifies rapidly by losing pressure quickly, dropping at least 24 millibars in 24 hours. In this case, computer models forecast this storm to drop from around 1006 millibars in Alabama, be down to around 976 in Boston and in the 960s by the time it hits Canada, Cohen said.

There are usually several bomb cyclones a winter near the East, but many are over the ocean and no one is affected, Cohen said. This is at least the third for the East Coast this winter, he said.

“This one is happening a little closer to land so it gets a little more attention, because if it’s just a fish storm, who cares?” Cohen said. “It’s not like it’s that unusual.”

It’s late in the season for bomb cyclones so this is likely the last one at least for the Southeast, maybe even the rest of the coast too, Cohen said.

The National Weather Service issued a winter storm warning from the Deep South to northern Maine.