Clinton to Speak at Memorial of Late Mississippi Gov, Wife 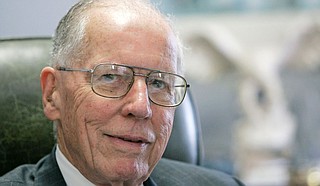 William Winter, a Democrat, was governor from 1980 to 1984 and was known as a champion of public education. He was 97 when he died in December 2020. Photo by Rogelio V. Solis via AP

Elise Winter was 95 when she died in July 2021. She was a founder of the Jackson area chapter of Habitat for Humanity.

The state Department of Archives and History said in a news release Monday that the event in memory of the Winters will be at the Two Mississippi Museums in Jackson, and it will be sponsored by the Foundation for Mississippi History.

“With Elise Winter by his side, Gov. Winter enjoyed a remarkable political career, but his commitment to public service extended well beyond electoral office,” Katie Blount, executive director of the state Department of Archives and History, said in a news release Monday.

As governor, Winter was best known for pushing Mississippi lawmakers to enact the Education Reform Act of 1982, which set rules for compulsory school attendance, established free public kindergartens and set quality standards for schools and teachers in a state that had long struggled with the intertwined problems of poverty, racial strife and poor academic performance.

Elise Winter was instrumental in development of a visitors' center at the Mississippi State Penitentiary at Parchman, so families could see their imprisoned loved ones.

William Winter joined the Mississippi Archives and History Board of Trustees in 1957. As board president, he oversaw the opening of the Eudora Welty House & Garden, the restoration of the Old Capitol and the construction of an archives and history building that the Legislature named for him.

William Winter encouraged Mississippi Department of Archives and History to strengthen its focus on Black history, acquiring collections of papers, developing exhibits and offering grants for preservation of significant sites. His friendship with Myrlie Evers led to her donating the Medgar and Myrlie Evers Collection to the department in 2002.

Winter helped persuade state leaders of the need to build the Two Mississippi Museums — the Museum of Mississippi History and the Mississippi Civil Rights Museum, which are separate entities under the same roof in downtown Jackson. They opened in 2017.