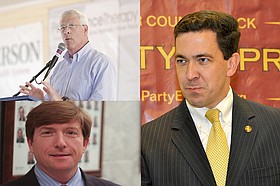 Mississippians will have to elect both U.S. senators and four representatives in the November 2018 election after Sen. Thad Cochran announced he will retire on April 1, opening up his seat for a special election. Pictured are Rodger Wicker (top left), David Baria (bottom left) and Chris McDaniel (right).