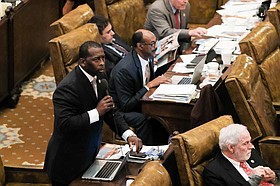 Rep. Chris Bell, D-Jackson, argued against a bill to shield the identity of police officers involved in shootings. It passed with an amendment to require the release of their names after six months, which would make Mississippi one of the least transparent in the nation on officers who shoot people.