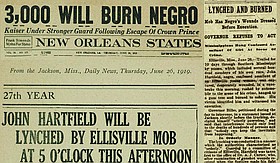 Southern newspapers, including the Jackson Daily News, announced the lynching of John Hartfield in Ellisville before it happened, probably helping increase the crowds that watched and later mailed postcards about his brutal lynching. Hartfield was accused of sexual assault of a white woman, but was offered no due process during the Red Summer of 1919 when white people were murdering and brutalizing Black people across the U.S., as well as burning their homes and businesses. Clippings: Newspapers.com