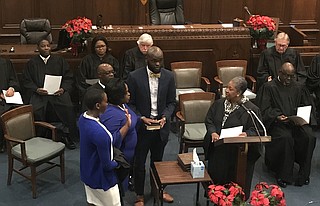 Former Hinds County District Attorney Faye Peterson was one of the judges sworn into the Hinds County Circuit Court bench on Dec. 27, 2018. photo by Ko Bragg

JACKSON — At a judicial swearing-in ceremony on Dec. 27, Senior Circuit Court Judge Tomie Green recalled times in her two-decade tenure on the bench where no one else looked like her. That day, however, after she and Circuit Court Judge Winston Kidd took their oaths for another term, the longtime judges swore in three newcomers: Former Hinds County District Attorney Eleanor Faye Peterson; outgoing Mississippi Rep. Adrienne Wooten, D-Jackson; and Johnnie McDaniels, the former executive director of Henley-Young Juvenile Detention Center.

Peterson and Wooten will join Green and Kidd on the circuit-court bench, cementing the first ever entirely African American bench in the Hinds County Circuit Court and with the most women.

Peterson said she woke up at 3:30 that morning to prepare her remarks. She delivered an impassioned and uplifting speech that got the packed courtroom on its feet.

“When God laid on my heart, ‘Faye, you should run,’ it wasn’t because anybody asked me to, it was because I felt the need of a county that I love,” she said.

For the District 4 seat, Peterson went up against Judge Joseph Sclafani, whom Gov. Phil Bryant appointed to fill the seat this spring. Peterson amassed 58.03 percent of the vote in the run-off, compared to Sclafani's 41.74.

After nearly a decade in the Mississippi Legislature, Wooten will take the bench. Bryant will call a special election to fill her seat, and 2019 is also a regular election year for lawmakers.

“I did it!” Wooten said as she exhaled. “There were so many that counted us out. So many folks didn’t believe that it could be done, but I am an example, a living example of when people say that it can’t be done, that it can be done.”

In the run-off, Wooten snagged the District 1 circuit-court seat Judge Jeff Weill vacated to run unsuccessfully for a seat in the Court of Appeals. Wooten defeated Jackson attorney Matt Allen with 53.35 percent, compared to his 46.30.

McDaniels took the oath as a Hinds County Court judge with his hand on the Bible his late mother gave him over 30 years ago when he left for Jackson State University. He will likely preside over the youth-court docket, which was long Judge Bill Skinner’s arena until he retired this year. McDaniels has spent the last three years navigating the Henley-Young youth-detention center through serious changes under the 2012 consent decree resulting from a Southern Poverty Law Center lawsuit against the county and the facility. McDaniels was also a municipal-court judge in Utica, Miss.

McDaniels began his remarks with an excerpt of what is commonly referred to as the Black National Anthem, “Lift Every Voice and Sing” by James Weldon Johnson. As he did on the campaign trail, McDaniels paid homage to his mother and father with the “three P’s” they taught him.

Correction: A previous version of this story swapped the seats Crystal Wise Martin and Tiffany Grove took over. We regret this error.