UPDATED: Who's on the Ballot in Mississippi in 2018? 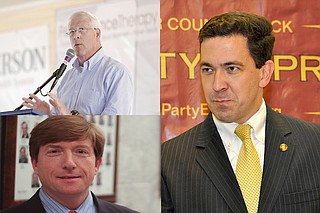 Mississippians will have to elect both U.S. senators and four representatives in the November 2018 election after Sen. Thad Cochran announced he will retire on April 1, opening up his seat for a special election. Pictured are Rodger Wicker (top left), David Baria (bottom left) and Chris McDaniel (right). Photo by Stephen Wilson.

JACKSON — *This story has been updated with the list of candidates who will be on the ballot in November.

This year will be an entertaining ride for Mississippi voters, who will have elect all four congressional representatives as well as two senators to represent the state in Washington, D.C.

State Sen. Chris McDaniel, R-Ellisville, was sure to shake up the election after he announced he would challenge Sen. Roger Wicker in what was expected to be a heated primary this fall. McDaniel threw Republican leaders off earlier this year, however, when he announced his plans to drop out of the race. He announced his intentions to run in the special election to replace Sen. Thad Cochran in March..

The special election will be on the November ballot like other congressional races, but candidates' political affiliation will not appear on the ballot. Candidates vying for Cochran's seat are allowed to run with a party affiliation, however. The winner of the special election must receive 50 percent of the vote plus one, or else it will go to a run-off election. McDaniel is running against incumbent Cindy Hyde-Smith, who replaced Cochran, and Mike Espy.

For a list of all candidates in each race, including judicial candidates, click the 2018 Elections Sample Ballot inline in this story or visit the Mississippi Secretary of State's website.

Find responses to questionnaires from the judicial candidates in the Jackson metro area on the Nov. 6 ballot here.

All races will be on Nov. 6, the same day as national midterms. For information on voting and the election, visit this link.