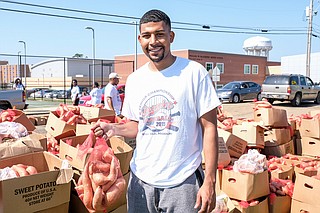 The Crop Drop, an annual event hosted by Jackson State University and the Society of St. Andrew, donated 25,000 pounds of sweet potatoes and other goods to the community on Saturday. Grant Broadway, a senior and Mister JSU 2019, poses for a photo at the event. Photo by Charles A. Smith/JSU

As part of the event, an 18-wheeler dropped off 25,000 pounds of sweet potatoes on the JSU campus, which 153 student volunteers then bagged up to distribute in surrounding neighborhoods, a release from the university says. The students filled roughly 2,500 bags with potatoes between 9 a.m. to noon on the day of the event and supplied them to more than 3,000 Jackson residents.

The Society of St. Andrew, a nonprofit organization that salvages produce that commercial markets reject because of imperfections in size, shape, sugar content or surface blemishes, donated the sweet potatoes to JSU, most of which came from Vardaman, Miss.. The organization also conducts sweet potato drops at other universities, including the University of Southern Mississippi.

For this year's event, JSU introduced an inaugural sweet potato pie-eating contest and gave away items such as barbecue sauce, ketchup, honey mustard and vegetables that the Blackburn Middle School Garden donated to the college.

Mississippi State University Libraries is partnering with Tuskegee University in Alabama and the Southern Literary Trail to present a lecture and exhibition this week celebrating the work of African American photographer P.H. Polk.

The presentation is part of MSU's "Unframed Images" art exhibit, which was previously on display in MSU's Old Main Academic Center in March. The exhibit features 14 images that have been digitally enlarged and reproduced from Polk's original works and depict early- to mid-20th-century African Americans such as Martin Luther King, Jr., George Washington Carver and farm workers in rural Alabama.

Polk was a Bessemer, Ala., native who opened his first studio in Tuskegee, Ala., in 1927. Tuskegee University, which was then called the Tuskegee Institute, appointed Polk to the faculty of its photography department in 1928, and he served as department head from 1933 to 1938. In 1939, he started operating his own studio in Atlanta before returning to Tuskegee in 1940 to serve as the college's official photographer while still running the studio.

On Friday, Aug. 30 at 6 p.m., Tuskegee University Archivist Dana Chandler will hold a discussion on Polk's photographs at the Charleston Arts and Revitalization Effort building (1 N. Market St., Charleston) in Charleston, Miss. MSU will host a reception after the presentation to celebrate the opening of the "Unframed Images" exhibit at CARE, which will remain on display there through Sept. 6.

Phi Theta Kappa Honor Society, the international honor-society program for two-year colleges, recently named Belhaven University to its 2019 Transfer Honor Roll for its efforts to support students transferring to Belhaven from community colleges. Belhaven is among 78 colleges and universities from around the United States that received the distinction, a release from the university says.

PTK gives the award to the top 25% of four-year colleges nationwide that receive the highest "Transfer Friendliness Ratings," which the organization bases on factors such as admissions practices, cost of attendance, campus life, recruitment practices and peer reviews, the PTK website says.

PTK is made up of more than 3.5 million members and nearly 1,300 chapters in 10 nations. For more information, visit ptk.org.