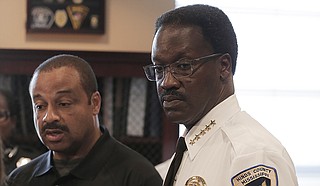 JACKSON — Lee Vance, who retired as chief of the Jackson Police Department in December 2017 after 30 years on the force, has filed to run in the 2019 Hinds County sheriff's race. Local media report that Vance will deliver an official announcement this upcoming weekend.

Last month, before receiving an award from U.S. Attorney Mike Hurst, Vance told the Jackson Free Press that retirement had been weird for him, suggesting he was getting antsy.

Vance joins a growing list of candidates for the position, including current Hinds County Sheriff Victor Mason, whose first term has been rocky.

In the last days of December 2015, Mason took over from Sheriff Tyrone Lewis, becoming the second African American to serve as the top law-enforcement officer for Mississippi's largest county.

Jones served as a reserve deputy for the Hinds County Sheriff's Department and worked in the private sector. In a bizarre series of exchanges, Mason allegedly texted Jones questions posed as "Mrs. Wilson," a fictional character, and often asked her to repeat what he refers to as Wilson's "third question": "Mrs. Wilson wanted to know if I wanted to f*ck you!" In many texts included in the legal filing, Jones responds "no," calling the advances "yucky," or laughing them off. (Asterisk added.)

Jones' suit is ongoing, and a settlement conference is set for Jan. 8 at 9:30 a.m. before Magistrate Judge John C. Gargiulo.

Their joint complaint states that in 2015 Mason asked Matory to work for him in anticipation of his election to the sheriff's office and that the then-candidate promised her that she would be his undersheriff if he won the election. He also promised Barnes she would be head supervisor of the Internal Affairs Division, she alleges.

"Matory told Mason that she was not going to arrange for him to have sex with Barnes. Mason became angry and began to distance himself from Matory and Barnes," the complaint reads. It also says that, allegedly, Mason requested selfies from Barnes on numerous occasions after he got her number, and she became so uncomfortable being left alone with Mason, even at work, that she asked Matory to accompany her during briefings. 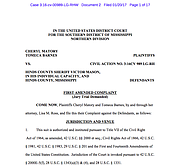 UPDATE: The Clarion Ledger reported on Jan. 9 that the sexual harassment lawsuits against Mason have been settled. U.S. Magistrate Judge John Garguilo announced a settlement was reached Tuesday in ex-Sgt. Belendia Jones' lawsuit against Mason, avoiding a scheduled July trial.

In the other lawsuit, ex-Chief Deputy Cheryl Matory and former head of internal affairs Tomeca Barnes made similar allegations against the sheriff. Lisa Ross, who represented all three women in the suits, said the second lawsuit was settled Wednesday. A trial had been scheduled for Feb. 4 in Jackson before U.S. District Judge Tom Lee. Ross said she couldn't discuss terms of the settlements, but said she wants all people to work in an environment free of sexual harassment.

Hinds County Sheriff's Department's attorney Claire Barker said the settlements' terms prevented public disclosure. Hinds County was also a defendant in both suits, and the Board of Supervisors will have to approve settlement terms.

'I'm Not Threatening Anybody'

In July 2016, Matory and Barnes were demoted and replaced with a white man and a black man, respectively. Barnes' and Matory's suit also brings sex and race discrimination charges against Mason. The trial is set for Aug. 6, 2018, in Jackson before U.S. District Judge Tom S. Lee.

Matory and Barnes' case will soon be set for jury trial, following a pretrial conference before U.S. District Judge Tom S. Lee at 9 a.m. on Jan. 17.

This time last year, Mason lambasted "dissenters" in his office, warning employees to get on board with his leadership or "get out of my way," he wrote in a departmental memo dated Jan. 18, 2018. In an interview with the Jackson Free Press last year, Mason said he had not yet identified those dissenters, nor did he threaten anyone in this letter.

"I'm not threatening anybody," Mason told the Jackson Free Press. "If you notice, I didn't put any names down there, no ma'am. I know better than that. If I was threatening them, don't you think I would have called them in my office?

Mason worked for the sheriff's department in the 1990s and also the Jackson Police Department. Before getting elected, he was an investigator with the attorney general's office. He was also a long-time associate of late Mayor Frank Melton. Then a member of Mayor Dale Danks' gang-suppression unit, Mason accompanied Melton and members of local gangs to a retreat at a ranch in rural Texas in 1987, a Clarion-Ledger story and photograph showed then.

Richard Spooner, who is listed as a former/retired Hinds County deputy sheriff and current security officer for an area hospital on his Facebook page, filed to enter the race on Jan. 4.

"It is now official!!! I qualified today to run for the Office of Hinds County Sheriff!!!" reads a Facebook post accompanied by a photo of him adding his name to the list of candidates in the circuit clerk's office.

Les Tannehill's name is also on that roster. He joined the Jackson Police Department in 1978 and worked there until 1991 when he became a Hinds County sheriff's deputy, which included a stint in the mounted patrol. The Jackson Free Press previously reported that while on mounted patrol, he lobbied his boss, then-Sheriff Malcolm McMillin, to allow mounted deputies to wear 10-gallon cowboy hats instead of the more shallow—and, therefore, less comfortable, in Tannehill's view—ranger hat that deputies wear today.

Donald Rhodes, a staff officer with the Mississippi Department of Corrections entered the race today, Jan. 7. He used to be a deputy sheriff with Hinds County from 1995-2015, and his LinkedIn page says he has been a funeral director for Westhaven Memorial Funeral Home since 1996.

One of JPD's public-information officers, Colendula Green, who has been with the force for over a decade, announced her plans to run for sheriff in September 2018, but she has yet to officially file with the circuit-clerk's office.

All candidates who have filed thus far are listed as Democrats.

Candidates have until March 1 to file papers with the circuit clerk office to enter this race.