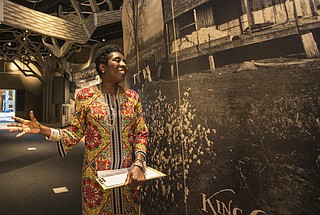 The Two Mississippi Museums, the Museum of Mississippi History and Mississippi Civil Rights Museum, in downtown Jackson named Jackson State University alum Pamela Junior as the museums' new director on July 1. Junior has served as director of the civil-rights museum since 2017.

Junior grew up in west Jackson just down the street from Jackson State University. She graduated from JSU with a bachelor's degree in education in 1981. She then moved out of state for seven years and came back to Jackson in 1990.

"As I tell people, I'm a young girl from Jackson, and I planted my feet," she told the Jackson Free Press.

Before becoming the director of the civil-rights museum in 2017, she had served as the museum manager of the Smith Robertson Museum and Cultural Center in Jackson.

Junior's new position as director of both museums comes after MCRM and MMH decided to merge their staff to strengthen the organizations' programming and visitor experience, a release from JSU says.

"Now the minds are really thinking together," Junior told the JFP. "We're coming up with amazing programs that people can be educated by, and learn how the journey happened, as far as the creation of the state, how it was founded, and how the (Civil Rights) Movement changed lives all over the world."

Lucy Allen, the current director of the MDAH Museum Division, is also retiring after 40 years with the department. Cindy Gardner, a 20-year MDAH employee who previously served as site administrator for the Two Museums, will take her place.

The Mississippi Department of Archives and History manages the museums, which opened in December 2017. The MMH explores the state's history from its earliest times to the present, while the MCRM tells the story of the Civil Rights Movement in Mississippi and the fight for equality in the state. The MCRM is the first state-operated civil rights museum in the United States. The Two Museums have attracted more than 320,000 visitors since the opening in December 2017, the release says.

On the museums' importance, Junior said: "They're important because they tell the story of Mississippi. You can't have one (museum) without the other. As I tell people, when you walk into the buildings, a lot of people are more interested in civil rights history, but in order to understand the civil-rights history of Mississippi, you must go through the history museum. The complex stories, the good stories, the bad stories, all of that really tells you what Mississippi is and where it's going, so by getting that information, when you walk over to the civil-rights museum, you understand why the things happened the way it did."

Junior wants to create a space where people can come in and get a better understanding of the people and climate of the state, and what Mississippi is and what it means to people.

"We invite everyone to come out and to continue to come out," she said. "There's always something that you haven't seen. There are going to be all types of programs, indoor, outdoor, we're just excited and ready to start it all over again. (It's) like we're reopening again."