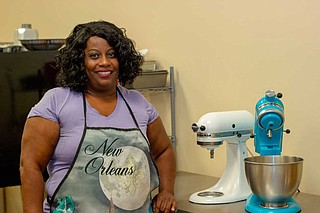 Ever since Brandon native Regina Wallace opened Heavenly Sweetz Bakery inside The Hatch in midtown (126 Keener Ave.) in October 2018, her business has expanded beyond the confines of the bakery's storefront.

Wallace partnered with Coffee Prose, a combination coffee shop and bookstore in midtown, to sell cakes, cupcakes, cookies, Danishes and other baked goods at the business.

"Midtown has strongly embraced me as a business owner since I opened my shop," Wallace says. "My favorite thing has come to be meeting new people and seeing the delight on their faces at what I bake." 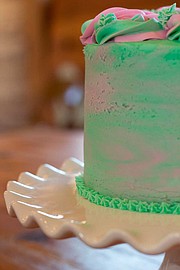 A cake from Heavenly Sweetz Bakery

Wallace's mother, Jeanette McKennis, regularly cooked for her neighborhood and people in surrounding communities, Wallace says. McKennis also frequently donated clothing and food to charities on holidays, and put together gift baskets for people in need.

Wallace's grandmother, Willie Gaines, was one of the founding families of Fannin, Miss., in the 1930s.

"Even though I never got to meet my grandmother, my mother always told me stories about how much she loved to cook and feed people," Wallace says.

McKinnis always told Wallace that her grandmother was the baker in the family, and that she got that gift for it from her.

"My mother is older now and can't do the community cooking she loves as much anymore, so I feel like I've picked up where she left off," Wallace says.

McKennis also encouraged her to take up baking as a profession. Wallace initially started baking as a hobby in 1998 after being laid off from her previous job as a factory worker. In 2015, McKinnis convinced her to begin selling cakes through Facebook as a cottage-food vendor (someone who makes and sells food in small batches out of the home). At first, Wallace mainly sold cakes only on Thanksgiving and Christmas. In 2018, she opened a commercial kitchen for Heavenly Sweetz at The Hatch, and created a website and Facebook page for orders.

Heavenly Sweetz offers cupcakes, tiered cakes, pies, cookies, sheet cakes and standard cakes in flavors such as caramel, Italian cream, lemon, strawberry and carrot, as well as specialty creations such as banana pudding cupcakes, lemon elderberry cake and more. Wallace's latest addition to the menu is scones in flavors such as strawberry, blueberry, lemon curd, and peaches and cream topped with cinnamon and nutmeg.

In addition to working with other midtown businesses, Wallace also donates her products to organizations such as The Ladybug Club, a nonprofit mentoring organization for girls ages 6-14 that aims to help them build self-confidence and self-sufficiency. The group holds its meetings inside the Hatch, and Wallace has catered some of the events. She has also donated food to events such as the Crossroads Film Festival in early April.

"I consider myself a giver, and since I don't have a lot of time around here, I make sure to give to my community anywhere I can any chance I get," Wallace says. "I also love to see the smiles on people's faces when they try my food. A big part of why I do this is for that feeling of satisfaction."

Wallace has partnered with Millsaps College's ELSEWorks program, which aims to teach students to be community leaders and grow local businesses. Starting in October 2018, the program assigned four of its students help Wallace solve problems with her business, aiding her with tasks such as building the website, writing copy for the business' blog and getting Heavenly Sweetz certified by the U.S. Food and Drug Administration. ELSEworks is also helping her with packaging for shipping so she can expand the business, she says.

"I want to be community-minded, and running Heavenly Sweetz connects me to everyone in my community while satisfying my need to give back," she says. "My mother and grandmother were both givers, and now it's part of who I am too."

For more information or to place orders, visit heavenlysweetz.com or find the business on Facebook.