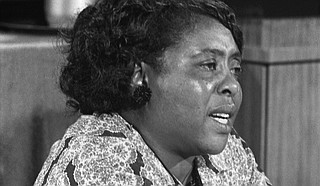 The Fannie Lou Hamer Cancer Foundation—a nonprofit organization that Freddie White-Johnson, program director for the Mississippi Network for Cancer Control and Prevention at the University of Southern Mississippi, founded in 2012—recently announced that it will hold a groundbreaking ceremony for the construction of its new headquarters in Hamer's native Ruleville, Miss.

The ceremony will take place on Thursday, Oct. 31, at 10 a.m. at the intersection of Floyce Street and Mississippi Highway 8 in Ruleville, and commemorates the first phase of the construction on the foundation's 10,000-square-foot facility. The event also marks the end of 2019's Breast Cancer Awareness Month.

Hamer, a women's rights activist and co-founder of the Freedom Democratic Party, died of untreated breast cancer on March 14, 1977.

Since 2012, the foundation has provided free mammograms and Pap tests for more than 5,000 underserved women in the Mississippi Delta, a release from USM says, as well as prostate cancer screenings for more than 1,200 men. Of the women tested, 79 have received a positive breast cancer diagnosis, the release says.

The estimated total cost of the project is $2.5 million. The foundation is currently fundraising and seeking funding to support the construction of the facility. For more information on the FLHCF, visit flhcf.com.

Mississippi State University's Bagley College of Engineering signed an agreement with Belhaven University's School of Science and Arts on Thursday, Oct. 17, to create a dual degree program for undergraduate students. Participants in the program will be able to earn a degree in mathematics, biology, business, chemistry or computer science from Belhaven and an engineering degree from Mississippi State University.

Students in the dual degree program can enroll in either university, a release from MSU says. The students will spend the first two to three years at Belhaven working toward a specified degree, including available pre-engineering and engineering courses. After finishing their studies at Belhaven, they will enter MSU's engineering college as a junior to complete the remaining required coursework for their engineering degree. Courses taken at MSU will transfer back for a bachelor's degree from Belhaven.

The dual degree program does not guarantee students will earn two degrees, the release says. Each student must fulfill the degree requirements for both universities to earn their degrees.

Tougaloo College is partnering with the Smithsonian Institute to add the college's collection of post-antebellum to mid-20th century artifacts to the Smithsonian's National Museum of African American History and Culture. With phase one of artifact digitization taking place just before the College celebrates its 150th birthday on October 19, 2019, the goal of preserving the college's history is being accomplished while administration focuses on building a sustainable future.

Tony Bounds, Tougaloo's archivist, met with the Smithsonian's digital archiving team in downtown Jackson this fall to begin the process, which involves digitizing early photos of the Tougaloo College campus. Also being added to the collection are photos of faculty, publications and buildings, including the Robert O. Wilder building, known as "The Mansion," which is the oldest building on campus. Tougaloo expects the digitization to be complete by summer of 2020, a release from the college says.

An act of Congress established the National Museum of African American History and Culture in 2003, and former Presidents George W. Bush and Barack Obama each signed bills authorizing federal funding for the facility. It officially opened in September 2016. The building is the 19th museum of the Smithsonian Institution and contains more than 36,000 artifacts.