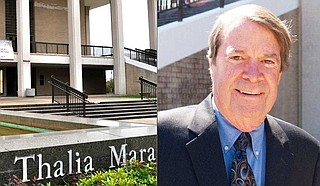 Michael Earl Raff served as director of cultural services for the City of Jackson, where he oversaw Thalia Mara Hall, the Smith Robertson Museum, the Mississippi Arts Center and the Municipal Art Center. Photo courtesy Jackson 2000

Michael Earl Raff, a former priest of Mississippi Catholic Diocese and husband of Linda Raff, executive director of Catholic Charities, died at Hospice Ministries on Wednesday, Oct. 23, after a long illness. He was 77. The visitation for Raff took place on Monday, Oct. 28, at Thalia Mara Hall from 11:30 a.m. to 1:30 p.m.

Born in Sioux City, Iowa, Raff was the oldest of five children and played football at seven different Catholic schools in the area over a five-year span. He attended Notre Dame, where he majored in business and earned a membership in the Blue Circle Honor Society.

After graduating, Raff attended the Immaculate Conception Seminary in Conception, Mo., where he earned a bachelor's degree with honors in philosophy in 1965 and a master's degree in theology with honors in 1969. He became an ordained priest for the Mississippi Diocese on May 24, 1969, at St. Peter's Cathedral in Jackson.

Raff served as pastor of St. Alphonsus Parish in Ocean Springs from 1969 to 1971 before returning to Jackson to serve as executive director of the Mississippi Council of Human Relations, where he worked to improve racial relations, advocated for the poor and disenfranchised and served as a liaison for business, labor and government to work toward equal employment in state jobs. While at MCHR, Raff met his future wife, then Linda Glass, and resigned from the priesthood to marry her in 1973.

In 1989, Raff opened a restaurant called "My Favorite Spaghetti" in a closed service station on the corner of Jefferson and High Streets. The take-out pasta restaurant remained open for 10 years.

Later, Raff served as director of cultural services for the City of Jackson, where he oversaw Thalia Mara Hall, the Smith Robertson Museum, the Mississippi Arts Center and the Municipal Art Center. At Thalia Mara, Raff oversaw the refurbishment of the building's auditorium, which finished in 2014. He retired in November 2018.