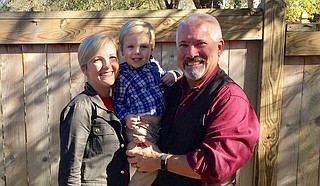 Madison-based author Ken Slay’s recently released book, “Daily Ponderances - Words of Hope, Humility and Sage Advice in 140 Characters or Less," began as a gift for Slay’s daughter, Mae Slay, on her 21st birthday. The core content of the book consists of 365 quotes, or “ponderances,” as Ken Slay calls them, which he began compiling in 2011.

“The ponderances are various sayings that had meaning to me,” Slay told the Jackson Free Press. “Some are satire, some are paradoxes, some are a play on words that could convey a particular message, and all of them were things I felt were important and wanted to share with Mae when she turned 21.

“Over 21 years, I know I said many things to her that she may or may not remember, or that may have been vague. I wrote that book as a way of conveying truths about things I believed in or wanted her to remember in a concise way, with the format of Twitter in mind for it.”

The original title of the book Slay wrote for his daughter was “To My Daughter at 21: Living a Bountiful Life in a Boolean World.” He self-published two copies of the book in 2012, one for himself and one for his daughter. For the public version that he published on Aug. 15, 2019, Slay changed some of the content that was specific to his daughter and family, and contained inside references, but kept most of the quotes the same, he says. Slay also accompanies each of the 365 ponderances, one for each day of the year, with a Bible verse that he feels is relevant to each one.

“The idea is one quote for each day on something we deal with in our lives,” Slay says. “Some are straightforward, and some aren’t. I want readers to examine themselves and their own situations, and apply each day’s ponderance to their situation in a positive way.”

Slay, 61, grew up in Hinds County outside of Jackson and graduated from Forest Hill High School in 1976. He graduated from Mississippi State University with a bachelor’s degree in business statistics in 1980.

After graduating from MSU, he took a job as a software programmer for a certified public accounting firm in Jackson called Demiller, Denny, and Word. In 1983, he went to work as a programmer for Sperry Univac, a hardware manufacturer that built computers. In 1986, he and a friend named Al Von Pingel started their own software development company called Mediquest, which Slay later sold to Companion Technology, a subsidiary of Blue Cross Blue Shield of South Carolina, in 1998. He continued to run the company on behalf of Companion until 2001, when he began his current work as a contract programmer for organizations in the Jackson metro area, including the Mississippi Department of Transportation and the Mississippi Division of Medicaid.

Slay has been a member of the Mississippi Writers Guild since May 2019 and has spent the past five years working on a fiction novel titled “The Cloud Revelation,” which he says is a cybercrime suspense thriller about a terrorist who writes a piece of software to destroy the world.

“I started writing when I was 8 years old because I love telling stories to people and creating poetry,” Slay says. “I joined the guild this year so I could have the chance to interact with other writers and learn from them.”

Slay and his wife, Ronda Slay, have been married for seven years. Slay also has two sons, Preston, 37, and Jordan, 34, by his late first wife, Debbie Slay. Although she and Slay were divorced before she passed away in 2015, Slay says he and his first wife maintained a good relationship, and that she assisted him in writing “To My Daughter at 21.”

“Daily Ponderances” is available digitally on Amazon and Kindle for $6.99 and in print for $10 through a website called Blurb.com. Slay also has his own website called KenSlaybooks.com, which has information and links to purchase the books.