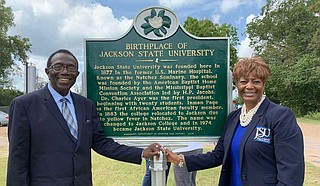 More than 200 Jackson State University administrators and alumni traveled to Natchez, Miss., on Friday, Sept. 20, to place a historical marker honoring the university at its founding location.

The marker is located on Cemetery Road in Natchez, where the original building that once housed the former Natchez Charity Hospital stood. The American Baptist Home Mission Society and the Mississippi Baptist Convention Association founded what eventually became JSU as the Natchez Seminary in 1877. In November 1882, the school moved to Jackson following an outbreak of yellow fever in Natchez, Earlexia Norwood, president of the JSU National Alumni Association, said at the ceremony.

Mississippi's government assumed control of the school in 1940 and changed its name to Jackson College. The college originally trained teachers, but expanded its curriculum to include a graduate program and bachelor's programs in the arts and sciences between 1953 and 1956, after which its name changed to Jackson State College. The school officially became Jackson State University on March 15, 1974.

"Our Natchez alumni chapter has actually been touring the site on buses over the last two years, but there wasn't anything there," Lackey told the Jackson Free Press. "We wanted there to be something here we can all see to honor the university's history, and so we decided in February this year to work to get this monument set up and dedicate it during our fall alumni council meeting.

"There were more than 200 people, including local legislators, who traveled out there by bus or by car to attend the dedication. In my opinion, that unveiling and the enthusiasm it brought out in our alumni was one of the greatest unifying activities we've done in the 21st century."

Today, Jackson State University offers 93 degree programs and has more than 7,000 students, as well as 50,000 alumni worldwide, a release from the university says.

University of Southern Mississippi President Rodney Bennett and Itawamba Community College President Jay Allen signed a memorandum of understanding to establish a program that will make it easier for honors students at ICC to transfer into the Honors College at USM. The signing ceremony took place on Monday, Sept. 23, at USM's Honor House in Hattiesburg.

Students in the program must graduate in good standing from ICC's Honors College, carry a cumulative GPA of 3.4 or higher and submit a letter certifying they are an ICC Honors College graduate, a release from USM says. Students must also submit a completed USM Honors College Keystone Application for transfer students.

For more information about the USM Honors College, visit usm.edu/honors.

Mississippi State University's Esports club will host the second-annual Esports Egg Bowl in Oxford on Saturday, Oct. 5, from 10 a.m. to 8 p.m. at the university's Humphrey Coliseum. One hundred gamers from MSU and the University of Mississippi will take part in a best-of-seven video game competition.

MSU's Esports club is school-sanctioned and has approximately 600 members, a release from the university says. The group holds bi-monthly Wednesday meetings in the Colvard Student Union's Fowlkes Auditorium. The club won the inaugural Esports Egg Bowl in 2018.

The competition is free to attend and is open to both students and the public. MSU will also live stream the event at twitch.tv/esportsmsu. For more information on MSU Esports, click here. To join the group, visit the MSU Esports Discord server.