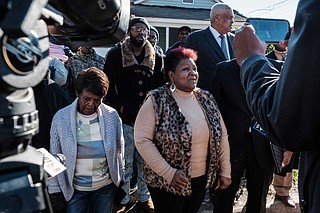 Bettersten Wade, George Robinson’s sister, demanded on Jan. 24, 2019, that the police officers who beat her brother, who later died, be held accountable. Beside her is George's mother, Vernice Robinson. National attention turned to police brutality cases after George Floyd’s murder in May. File photo by Ashton Pittman.

On Jan. 13, 2019, three Jackson police officers were sweeping the Washington Addition looking for a murder suspect when they saw George Robinson, 62, in his car, then pulled him out and started beating him in the head, including with a flashlight, witnesses said then. Within two days, he was dead from head trauma. Then on Jan. 23, 2019, Hinds County Coroner Sharon Grisham-Stewart ruled the death a homicide with the autopsy showing blunt-force-trauma to the head.

At the time, Mayor Chokwe A. Lumumba refused to name the three under investigation for Robinson's beating and death, making it clear that his new policy on identifying officers involved in shootings did not apply to those involved in violence such as beatings. 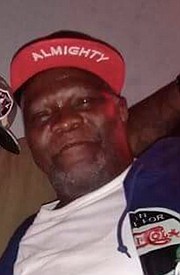 January 2019 was the same month that the City of Jackson released details on deaths and shootings at the hands of police officers from the previous year-and-a-half since Lumumba took office, after many months of this newspaper requesting the identities and details of those cases, resulting in a months-long debate in a series of task-force meetings.

The cache of documents the JFP received in January 2019 showed that two of the three officers now indicted for Robinson's murder were present for previous officer-involved shootings in the previous 14 months.

The City released records to the Jackson Free Press showing that JPD internal-affairs investigators exonerated Precinct 4 Officer Anthony Veasey in two of three separate shootings. Both Lampley and Barney, now indicted in the George Robinson beating and death, were present for both the incidents involving Veasey.

On the night of Nov. 15, 2017, Veasey along with other officers, were conducting an "administrative checkpoint" in two spots near James Garfield Circle and Abraham Lincoln.

Mikelle Bracey, 24, drove his car through a checkpoint, police say, hitting an officer's flashlight with his rear-view mirror. With police in pursuit, he ran into a grassy embankment. He then got out and ran, with Veasey close behind. Several officers said Bracey was holding either a black or a silver item, or a gun, in his hand, depending on the officer.

Veasey later said Bracey pulled out the gun in a yard behind a house, and that he fired at Bracey, striking him in the leg. Dets. Lincoln Lampley and Desmond Barney corroborated his story, but did not give chase alongside Veasey, the internal investigation found.

Police did not, however, recover the weapon officers reported seeing that night, or the next day, although they found a loaded handgun on the passenger seat of the car Bracey had fled. Bracey was taken to the hospital and was charged with aggravated assault on a police officer, but declined to talk to JPD investigators further about the shooting.

Records show that then-Lt. Anthony Moore was the supervising officer that night, and was later the interim police chief to whom Internal Affairs reported findings about the Bracey pursuit and shooting that evening.

Less than six months after the car chase, Lampley, Barney and Veasey—the "Delta Units" per JPD documents—were working another checkpoint at Maple Street near Congo when they heard a call about a nearby shooting on Denver Street. They were driving there in an unmarked vehicle when a woman in a Dodge Charger flagged the officers down to say that a family member of hers had been shot on Calhoun Street.

A JPD Internal Affairs report shows that the officers, in plain clothes, stopped at the house. Lampley was carrying a rifle when they got out of the vehicle, and told investigators later that he was wearing a marked police vest.

A witness on the scene told internal-affairs investigators that the three men were not obviously officers. "(They) thought they were there to shoot them," the witness told IAD, "and the group began to run." The witness heard one of the officers say, "hey, people," but he did not hear the three men identify themselves as police officers.

Officer Veasey said later that they identified themselves as police, however, and that Lampley said, "How y'all doing" as they approached. Veasey say those approaching started firing at them. Veasey said he did return fire, with approximately five rounds.

Det. Barney, now indicted for second-degree murder for the beating of George Robinson alongside Lampley, said that when one of the residents opened fire, he fired an estimated 10 rounds back at them.

Spencer Jackson, whom the officers later said fired at them, then ran toward a wooded area. Documents show that police set up a perimeter around the wooded area and apprehended him. Police did shoot him in his lower left leg, as IAD documents show without indicating when exactly he was shot, and then he was taken to the University of Mississippi Medical Center for treatment.

Documents the City of Jackson released to the Jackson Free Press in January 2019 showed that Internal Affairs investigator Adrian Turner found that the officers did nothing wrong. "They were attempting to make contact and possibly identify suspects to prevent any further violence between the feuding families," his report stated.

'Cleared By Every Avenue'

After George Robinson's death in January 2019, the Jackson Free Press reported that Det. Desmond Barney was working with the K-9 unit, which JPD Chief James Davis confirmed then was the same unit that stopped George Robinson while looking for suspects in the murder of Rev. Anthony Longino in the Washington Addition.

In October 2018, WLBT reported that Barney, Lampley and Veasey had asked the Civil Service Commission to investigate why they had not been able to return to active duty since they were involved in use-of-force situations. That was three months before the beating of George Robinson in the Washington Addition. Their attorney demanded then that they be returned to duty.

"They've been cleared by every avenue that we know of that Jackson Police Department policy requires, but they're still not returned to duty," attorney Francis Springer, who was representing the officers through the Southern States Police Benevolence Association, said then. "The City of Jackson is short enough police officers. They need everybody they can on the street. These officers are trained. They're veteran officers, and they need to be back on the street."

In a statement released last week in response to the indictments, Mayor Chokwe A. Lumumba said he is committed to improving the police force in the capital city.

"Our administration is committed to ensuring that Jacksonians have an accountable police department," Lumumba said. "As part of our accountability process, the City of Jackson has implemented a policy to turn all cases involving officer-involved deaths over to the DA for review by a grand jury."

"The Hinds County grand jury indictments, issued today, begin another phase of the process. In the full spirit of transparency, the administration will continue to monitor the situation and provide information to the public throughout each phase."

CORRECTION: An earlier version of this story indicated that officers under indictment were involved in shootings deaths in the year and a half leading up to George Robinson's beating and death. We have corrected it to say shootings, which did not lead to death. We apologize for the error.