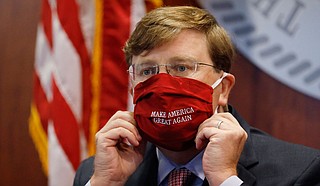 Gov. Tate Reeves has opted to open public schools without the testing and contract tracing that might make it work. Photo courtesy Rogelio V. Solis via AP

So it turns out that Albert Einstein didn't say: "Insanity is doing the same thing over and over again and expecting different results." Rita Mae Brown wrote it in 1983, but somebody decided old Al should get the credit.

However, its disputed origin doesn't make the phrase any less appropriate in light of how Gov. Tate Reeves is managing the coronavirus crisis.

In the first two weeks of August in Mississippi, an average of 848 people per day tested positive for COVID-19, and about 28 people died each day from it. It's the highest two-week average we've seen. Throughout it, medical professionals have alerted us to the foreseeable strain these numbers have put on our already inadequate health-care system.

During these two weeks, Tate Reeves has dawdled over whether the entire state should have a mask mandate. He's struggled with when schools should reopen. He watched the Mississippi Legislature override his July 9 vetoes of education funding for 2020-21, which mean that, here in the month they're supposed to be opening for the fall, the schools actually have budgets.

Now, as Ashton Pittman reported in the Mississippi Free Press, hundreds of students and teachers have tested positive for COVID-19, and thousands have been quarantined with the school year barely underway.

This pandemic is a crisis—a health crisis and an economic crisis. During a crisis, elected officials need to be agile and decisive. Leaders take in new information quickly and then make bold decisions based on it.

Unfortunately, Reeves has stayed behind the curve and done the minimum possible at every opportunity. The only principle he seems to be following during this crisis is, "Will it make Donald Trump happy?"

And he does it over and over again, expecting a different outcome.

Gov. Reeves knew the threat to Mississippi hospitals when he implemented one of the most liberal reopening plans of any U.S. state in late May. As with Florida and Texas, Mississippi has paid for its governor's lack of clarity and decisiveness—on bars, masks, mass gatherings—and sending public-school kids back to crowded school buildings.

Last week, two of our top medical officials said it makes sense to put off school until after Labor Day.

Dr. Thomas Dobbs has said that returning to "traditional" classroom environments is "wholly unacceptable," as the Sun Herald reported, and that he expects cases to "take off again" with schools and colleges opening up.

Reeves likes to say that nobody saw the big numbers coming in July and August when he opened the state up in late May. But, you know, some of us did. We've been harping on this at the JFP for quite some time, listening to scientists and medical experts. I'm sure that some of y'all out there feel the same way.

Here's the deal—COVID-19 isn't just going away. There is no vaccine or cure, yet. The virus is considerably more infectious and deadly than influenza—and, in a disturbing number of cases, it has lasting negative effects on people who survive it.

We social distance primarily to slow the spread of the virus so that fewer people end up in the hospital with it. As we've seen this summer, it's not an exaggeration to say that COVID-19 can take over our hospitals' regular and ICU capacity, threatening the health of both the virus' victims and other patients who need care.

If the governor wanted to lead, he would have talked to legislative leaders in June about how to fund and plan to open schools and colleges virtually this fall until we could test and contact-trace all students and teachers as we moved to in-person classes. We should only open with the best science and strategy.

Instead, he did the same thing he's been doing—kicked the can down the road—hoping for a different result. Unfortunately, that result seems to be the same one Donald Trump keeps hoping for: magic.

Reeves didn't make that high-level education decision in June. In the first two weeks of August, Reeves couldn't even pull the trigger on the decision to postpone public-school openings until after Labor Day, as called for by Mississippi's top health professionals.

So, Mississippi will likely find itself back in the same place it often finds itself: underfunded, overwhelmed and unprepared for what happens next.

If we're incredibly lucky, we'll have effective vaccines in 2021. In the meantime, the virus is still there. We don't have contract tracing. We don't have universal testing. We have distancing guidelines, masks and the awareness that prolonged indoor gatherings of people from different households almost guarantees infections, as we're regularly seeing now.

Right now, Tate Reeves should be leading the discussion on education  alternatives, not spending his time on "MAGA" politicking and football.

We need leadership on education and special education. We need leadership on health care (actually expanding Medicaid a few years back is looking awfully good right now), on prison reform (too many people in jails and prisons who don't need to be there are getting COVID-19), on unemployment and re-employment. We need to get people PPE, tests, food, shelter and so much more.

Governor, I know it's a slower-moving crisis than a hurricane, which means that taking helicopter rides and overseeing development boondoggles won't work this time. And I know that the leader of your political party is an unprincipled man-child who admits that "it is what it is" when thousands and thousands of Americans die on his watch. So maybe he's not the best example to follow.

You wanted the job, and I assume you're cashing the paycheck. It's time to step up and make some decisions, especially the tough ones, and start saving more lives in the state you govern.