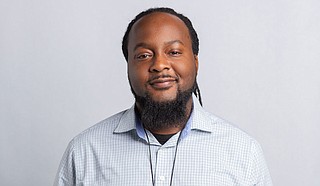 Stephen Brown, a Jackson native who performs as hip-hop artist 5th Child, has worked as assistant director of outreach for Get2College since 2013.

Get2College is a nonprofit that is part of the Woodward Hines Education Foundation. The organization helps students plan for and get admitted into college and obtain the money they need to pay for it. In his position, Brown helps students with financial aid, choosing the right college for their needs, setting a timeline for the college admissions process and improving their ACT scores.

"We're all students when it comes down to it, and it's important to learn about all the ongoing changes that take place regarding things like financial aid and higher education in general," Brown says. "What I like most about Get2College is that it's free to all students of all backgrounds and eliminates any kind of elitism in the process. All students have the same questions about college and need the same guidance regardless of their circumstances."

Brown, 33, has lived in Jackson since his family moved there from California when he was 3 years old. He graduated from Murrah High School and enrolled at Loyola University in New Orleans, where he received a bachelor's degree in public relations with a minor in music business in 2008. Brown, who was already working as a recording artist at the time, says he studied public relations and the music industry to help boost his music career.

"I wrote my first song when I was 11 and started making mix tapes with my brother, Herbert, to play for our friends," Brown says. "Then in high school a friend of mine had a computer with beat-making and recording software, and I started making my own CDs."

Brown began performing as 5th Child in Jackson shortly before he began living in New Orleans while attending Loyola University. He released his first album, "The Birth," in 2005 and has created eight full-length albums over the course of his career, with the most recent being "Which Way is Up?" in 2018. Brown won the Best Hip-Hop Artist award in Best of Jackson in 2013 and 2019.

After graduating from Loyola, Brown began teaching literary skills to fifth grade students at Woodville Heights Elementary School in Jackson using rap lyrics through a program called Ask4MoreArts. In early 2009 he received a full-time first grade teaching position at Woodville and also taught physical education there in 2011. In 2012, he began working as an academic tutor for the Boys & Girls Club of Central Mississippi and assisted students with ACT prep for Get2College, which served as his introduction to the organization. He entered his current position with Get2College in January 2013.

For more information on Get2College and its programs, visit get2college.org. To learn more about Brown as a recording artist, visit 5thchildmusic.com.