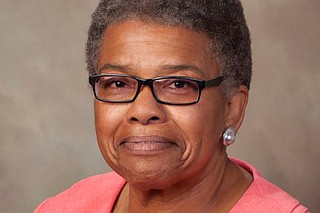 JSU's Margaret Walker Center will host its annual "For My People Awards" reception after the convocation in Student Center Ballroom A beginning at 11:30 a.m. Slaughter-Harvey will be one of the award recipients at this year's event, a release from JSU says.

JSU's MLK convocation is part of a series of curated events at the university that pay tribute to the lives of Phillip Gibbs, a political science major at Jackson State College, and James Green, a student at Jim Hill High School.

City and state police, including the Mississippi Highway Patrol and 75 Jackson Police Department units, surrounded a group of students outside Alexander Hall, a women's dormitory at JSU, after reports that some of them were pelting rocks at traffic and starting fires on May 14, 1970. Shortly after midnight, police opened fire at the students, injuring 12 and killing Green and Gibbs.

Other events honoring Green and Gibbs include a student-led March of Remembrance and the 50th anniversary commemoration of the event in May 2020.

The University of Mississippi is hosting an inaugural community dinner commemorating the life and legacy of Martin Luther King Jr. on Friday, Jan. 17, beginning at 7 p.m. in the UM Student Union Ballroom. Leslie Burl McLemore, professor emeritus of political science at Jackson State University, will deliver the keynote address.

The theme of the event is "Martin Luther King Jr. and the Right to Vote: The Long Road to Freedom." The event is free and open to the public, but attendees must register online here.

UM will host its third annual community reading of "Letter from a Birmingham Jail" on Saturday, Jan. 18, at 5 p.m. at Off-Square Books in Oxford.

On Monday, Jan. 20, UM will hold the community opening ceremony for its MLK Day of Service from 8 a.m. to noon at Second Baptist Church (611 Jackson Ave. East, Oxford). Activities will include a community breakfast that St. Peter's Episcopal Church will sponsor, a canned food drive, a voter registration drive that the Urban League of Women Voters will sponsor, an NAACP membership drive and a community program honoring civil rights activists. UM will hold a march from Second Baptist to the Lafayette County Courthouse after the breakfast.

Also on Jan. 20, UM will hold a film screening at the Powerhouse Community Arts Center from 2 p.m. to 4 p.m., which the Oxford Film Festival and Southern Foodways Alliance will co-sponsor. Films will include "Yazoo Revisited" by David Rae Morris and two films from the SFA.

Mississippi State University's College of Veterinary Medicine will begin accepting applications for its 10th annual veterinary camp on Tuesday, Jan. 28. The camp is based on freshman and sophomore MSU veterinary courses and allows students ages 10 to 17 to study veterinary medicine under MSU faculty and doctorate students.

Applications are available online here. The submission deadline is noon on Friday, Feb. 28. For more information, call 662-325-4401 or visit cvm.msstate.edu.