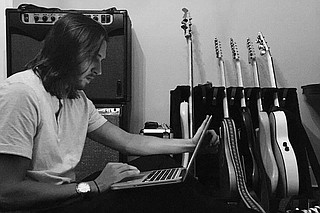 Growing up, Seth Power found himself locked away in his room for several hours a day, writing songs with his new recording software. The only force that could push Power into emerging from his music lair was sports, as he enjoyed baseball, soccer, football and track. That dynamic changed over time, though, as Power's passion toward music intensified.

"Sports was my outward activity, and music was a very private thing for me. I didn't really share it with anybody. Then at some point, over the course of my life, those two things shifted; suddenly, music became my outward personality and sports slowly disappeared," Power proclaimed.

Born in Flowood and raised in Brandon, Power fell in love with blues and old-school R&B, being a fan of artists like Stevie Ray Von, Johnny Lang, John Mayer and Led Zeppelin. At 8 years old, he started taking piano lessons, and his parents gave him his first guitar at age 10.

Power enrolled in Mississippi State University and played football for the Bulldogs during his freshman year in fall 2011. During spring training, though, Seth suffered from a severe concussion, his fourth one in the last year at the time. The injury resulted in migraines and memory loss and convinced Power to put his sports career in the backseat.

As fate would have it, the next weekend, Power attended a live music show with some high school friends. One of his friends knew the person in charge of booking artists for that venue and connected him with Power, who was offered a slot coming up two weeks from then. After performing publicly, Power began to seek out more gigs, and he soon started to fund his way through college by performing, his artistry evolving along the way.

"I'm super proud of it," Seth smiles. "If I could go back in time and stand in front of my 14-year-old self and hand-deliver this project of music that I've made now to then, I don't think he would believe it came from the same person. I try to tell people all the time about music, art and creativity: it's not a binary thing. It's not like you have it or don't have it. You can develop it."

Power made an analogy between songwriting and carpentry. While having a natural inclination for the craft may help, putting the time and effort can hone one's ability, even if that person does not initially exhibit that inherent skill.

"I used to sound terrible," Power says emphatically. "I wasn't good at it. It took years and years of just doing it." Between the ages of 13-17, Seth says he must have written between 60 and 80 songs, but only disclosed roughly a dozen to others.

A large portion of his songs are inspired by his wife and best friend, Collette, whom he met in seventh grade—although he came to the epiphany that she played a role in the substance and growth of his music only a year ago.

"She was my first muse. When I met her and we became friends, that's when I began to write music and when she left, that created a different type of music that was more sad and depressing. When she came back into my life when I was 22, that kicked off a whole new era of music for me," Seth coos. "I didn't realize how closely related my big creative spurts were to periods of time that she was around versus not around."

After earning his bachelor's degree in business with an emphasis in management from MSU in 2015, Power signed a small indie contract, which led him to take music seriously. He worked as an independent artist for a few years and endured the "starving artist" struggle: recording music in the makeshift studio in his apartment while working to maintain a roof over his head. During this time, Power learned skills in recording and sound engineering. He hoped that a label would pick him up based on his potential as an upcoming musician and songwriter, but he quickly determined that the music industry does not necessarily work like that anymore.

"Artist development is a thing of the past. They'll get you the last 5%, but if you're not 95% on the way there, they're not interested," Power says. "It's too big of an investment these days for labels to develop artists. They just want to grab you at the right time."

Resilient, Power borrowed some money to invest into his first EP, "Magnolia Soul," which he released in fall 2017. The release show successfully sold more than 240 tickets, but the six-track album did not gain the acclaim Power had hoped to see. He decided to use an international Creative Commons Attribution copyright to give away music from the EP for free so that subscribers can use his music however they want as long as they give the artist credit. Before long, Power's music was being used in commercials and online videos, and his numbers began to explode in Europe.

"That was a weird, counterintuitive thing that I did that ultimately has worked out super well for me. I tell local artists all the time now—if you feel like you're stuck in a corner of the internet and you can't get out, just give it away."

This sacrifice led to Power's music being played more than 3 million times across the multiple videos on YouTube and later contributed to the creation of his new upcoming album.

Power uses his experience to encourage other budding music artists.

"You don't need to worry about making money right now. Money in the music industry is extremely hard to make, so in the beginning you just need to worry about listeners and followers. If you have to give your music away in order to gain a fanbase, then that's what you do." Power says.

That said, Power says he believes that making music just to be popular is a sure way to lose out in the long run.

"A lot of it comes down to your sense of self-worth and making (music) that you believe in." Seth says.

He confessed that early on in his career, he made the mistake of trying to make popular music to appease the masses, which lacked substance, instead of making music from his heart.

"In those situations, I feel like I lost twice, because people didn't care and because I really didn't believe in the music I was making. If you just mimic what's popular in an attempt to gain popularity, that's just a shooting star, you know? It's going to come, and it's going to go."

"Souvenir," Seth Power's first official album under his new partnership arrangement with Universal Records releases Jan. 10. Power will be performing at an album release party at Duling Hall at 8 p.m. Tickets are presently $12, and people can buy the 18-track album for $15 at the event. Physical copies of "Souvenir" are also available through his website. The album cover shows Seth sitting on the ground surrounded by sentimental objects, including his first guitar and photos from his past.

Power says that this album is a journey through his life, from his collegiate years to his evolution into young adulthood, as he stepped out into the world and began to figure out who he really is.

"It's really about making that leap and growing and developing as a person and as an artist in that process and accepting everything that led me to this point." Power explains. "These songs are the most honest representation that I can give of that period of my life. It covers elements from previous relationships, things that I did wrong, things that were done to me that I felt were wrong, coming to terms with all of these things in a graceful way and being totally accepting of my past and having faith in the process."

Power continues, "Those things were necessary for me to grow and become who I am now so that I could take those experiences and translate them into art; make them become something much larger than what created them." Power says the biggest concept and takeaway for listeners is self-acceptance and executing that acceptance gracefully. "There's no resentment. The process of creating the music gave me that release and gave me that ability to move on. It's a perfect storm situation."

After the album release show, the 27-year-old will journey on his first regional mini tour, making stops in Nashville, Tupelo, Starkville, Knoxville, Asheville, N.C., and more and then back to Jackson for a closing show at Hal and Mal's on Jan. 24.

Seth explained the many hoops artists must jump through to gain success in the music industry and says he is excited for the new doors that this regional tour will open for his future.

"If you want to get on as an opening act for a larger artist, (regional and national networks) want to know if you have experience touring," he says.

This regional tour is a collaborative project with Kevin Daniel, a new NYC artist, who has touring experience and has invited Power to headline alongside him. After the tour, Power plans to reapply to both regional and national networks.

"It'll make booking easier because you have a mediator who curates artists and venues to make sure they're legitimate." Seth explains.

Power says he is convinced that the most important tools to have as an aspiring artist are endurance and momentum.

"The biggest issue I see with a lot of people pursuing music is that they sprint, then stop, sprint, then stop. That'll kill you. Momentum is everything," Seth says. He says people should stay prepared and remain teachable so that when opportunity comes, we are ready. "We have to keep learning. ... It took me five years to go from recording music in my apartment, in my closet, averaging 100 streams a month and making $100 off an EP that took me 500 hours to make: no return, except for experience. Now, things are different."