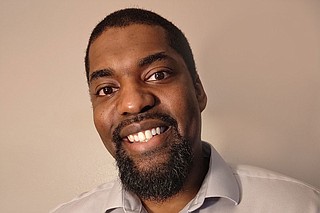 Clinton resident Stone Abdullah received a $500 mini-grant from the Mississippi Arts Commission in November 2019 to support advertising, marketing materials and distribution for his book "Journey of the Shadow, Volume 1," which Abdullah self-published in August 2017.

"Journey of the Shadow" is set in modern-day Japan and stars 19-year-old Tsumisu, who leads a secretive clan of supernatural warriors investigating the return of an ancient evil. Over the course of the story, Tsumisu discovers that his own best friend, Shujin, may be connected to the mysterious goings-on, and that the presence of two extraterrestrial civilizations on Earth may be the key to everything.

Abdullah first began working on the series in 2001 and finished the first draft of the first volume by 2006, then began writing the second volume off and on for months at a time while revising Volume 1.

"This story is the kind of thing that I'd be looking for if I went into a bookstore looking for something to read for myself," Abdullah says. "When you're writing you feel like you're the master of this world. Sometimes I'd just go to sleep thinking about it. These characters lived in my head, and even something like just watching a sunset in California would inspire me for a scene for the next volume."

Abdullah has written four volumes in the series but has only published the first so far. Since the 2017 release of the first volume, he has been focused on promoting his book on social media and preparing art renders for the series. Abdullah told the Jackson Free Press that he is also working on an audio book for Volume 1, which he hopes to have recorded by July 2020. His plan for the remainder of the series is to release one book every two years.

Born and raised in Jackson, Abdullah's parents home-schooled him through high school, and he then enrolled at Hinds Community College in 2010. He later transferred to Jackson State University and received a bachelor's degree in earth systems science, which studies the climate, oceans and geology of the earth and how they all interact, in 2014.

"I've loved science from day one and read any science book I could get my hands on as a kid," Abdullah says. "I grew up watching documentaries and reading encyclopedias and books on space and solar systems. I wanted to be a professor and dreamed about working with people in that field."

In 2015, Abdullah enrolled in a doctorate program at the University of California Irvine, but after two semesters received word that his mother had fallen ill and returned to Jackson to care for her.

After returning, one of his professors at JSU, Remata Reddy, told Abdullah about a new doctorate data science program the university was starting at the time and decided to enroll in 2015. That same year, Abdullah began working as a computer science researcher for the Army Corps of Engineers in Vicksburg through a program at JSU.

In June 2019, JSU ran out of funding for the data science program and had to cancel it, which also meant Abdullah could not continue his work with the ACE as the position had been dependent on being an active student at JSU.

Abdullah is currently working as a benefits consultant for the insurance company Aflac, but says that he is confident that he will be able to resume his studies at JSU if the university can get funding for the data science program again, and plans to return as soon as possible.

"My work is all still there with the university's registrar and isn't going anywhere, so I'm not crying over spilled milk here," Abdullah says. "I spent a lot of time on my research, and I'm not planning on giving up on it."

"Journey of the Shadow, Volume 1" is available on Amazon and barnesandnoble.com, as well as through Abdullah's own website, journeyoftheshadow.com.