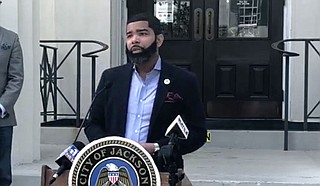 Mayor Chokwe A. Lumumba informed the Jackson City Council of a soft opening for the zoo planned for August. Photo courtesy City of Jackson

The City of Jackson Zoo may open in August after receiving a temporary exhibitor’s licence, Mayor Chokwe A. Lumumba informed members of the Jackson City Council Tuesday.

"We have received a temporary exhibitor's license for the zoo," he said. "We are preparing for an August start, (with a) soft opening, and (it's) soft because of COVID."

The mayoral administration also sought approval for an additional $185,000 to fund it till Sept. 30, which will mark exactly one year since its closure.

ZoOceanarium Group Inc, which will run the zoo, needed the zoo to have its exhibition license in place.“The only thing that has stayed our ability to get the permanent license per the USDA has been COVID-19, (because) they are not doing field visits," Lumumba said. "As we went down the checklist of the things they wanted us to accomplish, we have accomplished those things sufficiently to their liking, based on the read of what that looks like. That is why they gave the temporary license."

Lumumba anticipates that on the other side of COVID-19 restrictions, the City should have a permanent license in place to replace the temporary one he said arrived last Friday.

Ward 1 Councilman Ashby Foote wondered why the administration is seeking additional funding beyond the initial budget of $695,140.

"Essentially, we had a number of employees that we had in the budget; we built that number of employees in the budget," Chief Administrative Officer Robert Blaine responded. "There were some adjustments as we went through the year, and as we went through, we saw that we have to add to this line item in order to be able to get the full amount of payment of all the employees throughout the period."

The council approved the requested amount for payments to contractors and vendors, as well as food supply and veterinarian services for the animals until Sept. 30.

The Fondren Business Improvement Development District, located in Ward 7, got a boost Tuesday as the Jackson City Council approved the property tax of 8 cents per square foot, amounting to $241,116.36, for its management.

A letter dated July 7, 2020, signed by FBID Managing Agent Rebecca Garrison, and directed to Ward 7 Councilwoman Virgi Lindsay included a list of the properties and their corresponding property-tax appraisal for inclusion in the Hinds County taxation arrangement for 2020. "Once collected, the funds will be distributed to the city and then allocated to the Fondren Business Improvement District," Garrison said.

"They (FBID) are getting organized. They are doing very well. The business community is very supportive and voted to increase their property taxes by a small amount so that they can come together and do some cohesive improvement to the district," Lindsay said. "They have new leadership there, a new executive director, so the commitment is really strong."

In September 2018, the Jackson Free Press reported that 50 percent of the money generated would fund private security patrol separate from the Jackson Police Department. The rest of the funds would go toward landscaping, administrative expenses, marketing, economic development and contingency funds for unexpected expenses.

The levy is "on all taxable real property in the Fondren Business Improvement District within the corporate limits of the city of Jackson," as noted in the order the council approved.

Jackson City Council has confirmed Mayor Chokwe A. Lumumba's re-appointment of Chris Myers to the planning board for a new five-year term. The architect, and 2001 graduate of Mississippi State University, represents Ward 7 on the board.

Both Ward 7 Councilwoman Lindsay and Ward 2 Councilman Melvin V. Priester Jr. spoke highly of Myers and urged the council to keep him on the board.

"He has been an extraordinarily great planning board member," Lindsay said. "He is very conscientious. He always makes good decisions that are in the best interest of the city. I can't speak highly enough of him."

The 15-member planning board advises the City on zoning issues and on managing the environment.