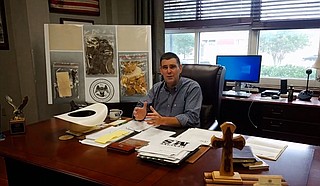 Gipson said the indiscriminate disposal of the seeds packaged with shipping code from China could spread diseases to plants in the state and affect the agricultural industry.

He urged those who receive the seeds to call the Mississippi Bureau of Plant Industry at 662-325-3390.

"I started getting calls over the weekend from people in Mississippi who got packages just like this. They have not ordered any seed, but these packages show up in their home," he told the media. "If people get these seeds, we encourage them not to throw them away, but to keep them and call our number, not to discard even the package but keep it and call our number. We are going to send someone to your home."

Several states across the United States have reported an influx of the seeds.

Gipson disclosed that watermelon seeds are among those found, and some are undetermined.

He said that after collection, his agency will test the seeds and give them to the United States Department of Agriculture for proper disposal.

"Don't just throw them away because they can find their way to a landfill, and they come up unintended,” Gipson said. “We want to make sure that these seeds don't find a home in Mississippi, and bring (more) invasive pests that we have been dealing with. These packages show up, and they may be marked as jewelry."

He said farmers across the state have been calling him, expressing their concern at the development.

"One of these seeds with one type of fungus could decimate our sweet potatoes," he said. "One of the things we do here at the Department of Agriculture and Commerce is trying to control invasive pests and species, and that includes plants."

He said his department has been picking up such seed packages across the state since Sunday with 15 counties already covered at the time of the press conference.

"We don't know what is going on, but what we believe is happening is that these e-commerce companies which may be based in China are shipping these to people for free and then write a fake review to try to boost their sales," he said. "It is a scam; it is a very serious scam because these seeds could take root in Mississippi and subvert our production of agriculture."

He said the USDA is trying to track down the source or sources. "We are working very closely with them to give them the evidence they need to do that," he added.