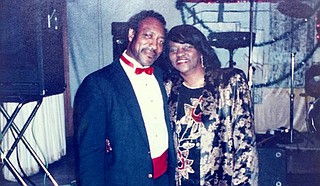 The smell hits you in the nose, as the scent of open sewer flows around Sarah Pittman's house at 3151 Sage St., in Jackson, and it stays with you. Sarah and her husband, Jesse, have been dealing with the smell for about a year. Sarah Pittman, who is 84 and has three daughters, 14 grandchildren, 26 great-grandchildren and three great-great-grandchildren, believes she should not have to live with the awful smell of sewage.

They hired Roto-Rooter, a plumbing and drain service, to fix the problem. The receipt shows that the Pittmans paid $264.60 and got zero results, because Roto-Rooter found it is in the purview of the City of Jackson to fix. The receipt is dated May 18, 2020, for repair code 101A and describes the work: "ran cable toward street about 70 ft and ran into mud. (Indistinct) is only 30ft and couldn't unstop line."

The Jackson Free Press reached out to Roto-rooter who confirmed that the Pittmans were their clients but declined to give further details of their work or specific reasons they concluded that the problem is the local government's responsibility.

The Pittmans said someone came from the City and said the couple had to privately fix the problem but then came back saying sorry, the City does need to fix it. They showed the Jackson Free Press a name with the number 601-960-1875 they wrote on the back of a book, as the person they reached out to in the City of Jackson to get some relief.

This reporter dialed the number, which was to the sewer-management department of the City of Jackson, and was directed to the utility manager and eventually to the constituent services  division of the Office of the Mayor.

After the Jackson Free press provided the Pittmans' address asking for clarification, Constituent Services Manager Keyshia Sanders promised to report back, pledging that someone would go to the Pittmans' home to fix the sewage problem.

The sewer flows and stinks next to Sarah and Jesse Pittman’s home on Sage Street in Jackson. Photo by Kayode Crown

That was June 10. On June 11, this reporter called again, with the same promise repeated. The Pittmans say the City always promises to come the next day, but they do not show up. Jackson Free Press visited the family on June 19 and at that time, nothing had been done about their problem.

The Pittmans own the three-bedroom, two-bathroom single-family residential house, where they want to live their old age with some ease, not imagining that they would be dealing with the smell of raw sewage regularly assailing their nostrils.

In all the 45 years she has lived in the house and raised her kids (now age 66, 64 and 62) and sending them to a school across the street, Sarah Pittman never had this problem.

After trying their best to get the attention of the City of Jackson, the couple concluded that the lack of response was because they live on the "wrong" side of Jackson.

Nothing, it appears, can change Sarah's conviction that nothing she does will ever work to get the attention needed. The impression they have is that because they are in a poor neighborhood, the City "acts like you don't exist," she said. She believes the City would have acted within 24 hours if the problem was in a more affluent neighborhood.

"If it is in a white area, it won't take more than one day to get it fixed. If they have this problem, there is no way it wouldn't have been fixed. That is the way I feel," she said. "They won't let it go for this long in the white neighborhood. I don't think that is fair."

The neighbors have started complaining, Sarah said, because of all the smell, and she had to explain to them that it is not her fault, but the City's responsibility.

"The one at the back is already complaining," she said. "As long as it was not really hot, they could not smell it so bad because my husband was putting things on it. But now it is hot, and the smell is awful. I don't know what else to do."

Her husband recently bought cleaning materials like bleach to pour on the sewer flowing beside their house to  reduce the smell.

"He bought $40 in cleaning stuff and poured it back there so that we can breathe better," she said. That is, they are paying for the air that they breathe.

"He went to Home Depot and got two bags of lime and sprinkled it all around the house. It's powdery and keeps down some of the germs. He got about six different things to put out there," Sarah Pittman said.

Turn Up the AC or Not?

Sarah Pittman retired 20 years ago, when she was 64, from her work for Bernard Clothing where she worked as a seamstress after 11 years. "Because of my back, I cannot sit for a long time," she said, referring to a back injury.

However, once a seamstress, always a seamstress. She is constantly sewing different clothes to keep busy as this reporter witnessed in her sitting room on two visits.

The house has window air conditioners, which suck in the sewage smell from outside. So they have to compromise between getting cooled, which comes with smelling other people's decomposing waste lying around your house, and suffering the heat of summer as the temperature gets into the 90s. 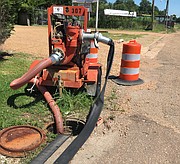 The City of Jackson rented this equipment from Hydra Services Inc. for sewage work. It sits on Atley Street, having reportedly broken down. Photo by Kayode Crown

"Once I turned the air conditioner in the bedroom on, I had to turn it off quickly," she said. "Then it got so hot. When I woke up, I was soaking wet. The fan does not give much air. I put the fan on, but I could not turn the air back on because the smell was just too bad."

The website healthfully.com reports that breathing in raw sewage fumes is described as both unpleasant and physiologically damaging.

"Raw sewage produces a melee of gaseous compounds. Common colorless gases encountered in sewage systems include hydrogen sulfide, carbon dioxide, methane and ammonia. High levels of these gases become toxic, and high concentrations of methane and carbon dioxide, in particular, displace oxygen in the air. Additionally, industrial solvents and biological contaminants in sewage may become airborne and cause adverse health effects," it noted.

The Pittmans are at their wit's end. After paying Roto-Rooter with no solution in sight, Jesse Pittman went to the City to show what they have spent.

"They told him that we might get our money back," she said.

But the money is not her biggest concern. "I want them to come out here and find out what the problem is and correct it, so we can quit smelling the 'germs,' because it is raw sewage. It does not matter if we don't get the money back. They should do what needs to be done so I can get peace of mind."

Jesse Pittman told Jackson Free Press that he found out that the City's machine to investigate the sewer problem had broken down. This reporter saw the machine on Atley Street, near Sage Street, with a maintenance hole full of sewer opened on the street with pipes running into it and no one in sight.

Hydra Services Inc. is the company name displayed on the equipment. A quick online check revealed that the company is headquartered in Alabama, but the equipment has a Jackson number on it. The reporter called the number and the management said they hire machines out to the City, and if there is any problem with any of them, they expect the City to give them that information.

"They told my husband that somebody stole the battery with the machine out there, and they have to get another battery, and then something else broke down in it," Sarah Pittman said.

"My husband said he is getting tired of calling, and they tell us they are coming, and (City workers) never show up. They say we'll be there tomorrow. Tomorrow never comes."

She said someone at city hall told them that the problem is all over Jackson, which means people are exposed to unhygienic conditions because of sewage spilling—a public-health emergency, if that is indeed tree true.

Sarah Pittman said the next thing she plans to do is to reach out to the health department.

"There are all sorts of pathogens in what comes out of a sanitary sewer system," Miller said, as WAPT reported then. "It's our intent to keep all of that inside the pipe until it gets to our wastewater-treatment plant."

On Feb. 4, the Jackson City Council approved contracts for sewer repairs. Areas covered in the contract are Forest Hill Road (Ward 6), Kings Highway and Warrior Trail and on Old Canton Road near St. Andrew's Lower School (Ward 7). The council awarded the repair work on Forest road to Hemphill Construction company for $36,000 and the remainder to Utility Construction Inc. for $90,000. The funds, according to council documents, come from "Fund 173 1% Sales Tax."

No Solution in Sight

The Pittmans' house is located in Ward 3, represented on the city council by Kenneth I. Stokes. He expressed profound displeasure at what they are going through. He said that it is inhumane to treat citizens in Jackson with disregard for their health, safety and welfare.

"These elderly tax-paying citizens deserve to be treated with respect and admiration, he told the Jackson Free Press. "But now, they are being treated as though they are second-class citizens."

Ward 2 Councilman Melvin V. Priester Jr. said people in his ward are dealing with a similar issue, and it is a big problem across the city.

"There is one we are dealing with in the intersection of Watkins Drive and Forest Avenue that has been going on and off for almost two years," he said in a telephone interview. "The problem is that a lot of the sewage lines are old and need to be replaced. The other problem is that we have soil that moves around a lot. A lot of the city has what you can call Yazoo clay which shifts more than other soils. That causes a lot of breaks."

Priester said the sewage problems are expensive to fix, involving digging up roads and replacing the pipes.

"You also have the problem with people putting things down their toilet that are not supposed to be there, clogging up the line and causing breakages," Priester said.

With the City of Jackson's problems collecting water-sewer bills, which piled up dramatically during its ill-fated contract with Siemens Inc., Priester said the budget to address the issue has been "dramatically" reduced.

Email story tips to city/county reporter Kayode Crown at [email protected]. You can also follow him on Twitter at @kayodecrown.