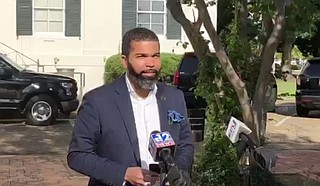 Jackson Mayor Chokwe A. Lumumba cautions residents as the press briefing to not let their guard down. Photo courtesy City of Jackson

Mayor Chokwe A. Lumumba is expressing frustration at people not following social-distancing guidelines to counter the spread of COVID-19, saying he may need to tighten restrictions he earlier loosened if the rate of infection and hospitalization spikes.

Speaking to the press on June 22, the mayor said that with the number of confirmed Hinds County cases nearing 1,600 and 33 deaths, the virus is "a looming threat to our communities nationwide."

The latest count of COVID-19 cases in Hinds County, as reported on the Mississippi Department of Health website as of June 25 is 1,646 and 34 total deaths.

"I have witnessed in recent days some outdoor events or seen photographs from outdoor events where people have not been taking the necessary precaution of wearing facial masks," Lumumba said. "They have not been utilizing the social-distancing regulations and requirements, and I just want people to know that they are putting themselves and family members in harm."

The mayor said retail and restaurant businesses need to ensure that customers wear facial masks because of the public-health risk of not doing so, urging them to remember the strain of having businesses shut down.

"We are doing all that we can to operate an economy in the presence of COVID-19, but we will not hesitate to reimpose the regulations in the interest of public health and safety," he warned. "This is still a very critical time. We want to do everything that we can for people to enjoy life, not to have 'stay at home' orders, but when faced with the alternative of more people dying, more people getting sick, we will do what we have to do."

Lumumba mentioned the rate of hospitalization, the use of ventilators and the rate of infection as factors that would inform whether he will put restrictions back in place. "At any moment, our hospitals can be overburdened, and we cannot afford to afford that," he said.

In a Tuesday interview, State Health Officer Dr. Thomas Dobbs warned of “an absolute disaster” coming in the fall, in which Mississippians should “prepare for not being able to get into the hospital if you have a car wreck, (to) have a heart attack and there not be a ventilator to put you on.”

Mayor Lumumba called on all living in the Jackson metro area to be cautious so that Jackson hospitals are not overwhelmed. "There can be asymptomatic carriers. Even if you are young and you are in good sound health, you can be a silent carrier to your grandmother, mother, brother, sister who may have pre-existing conditions," he said.

He noted that while he has not criminalized not wearing facial covering, with citations read to violators, the move is not off the table.

At the Jackson City Council meeting on June 23, Lumumba said those who want facial masks should call the Constituent Services Department at 601-960-1089.

Ward 4 Councilman De'Keither Stamps has introduced an ordinance banning political gerrymandering and seeks to redistrict using major thoroughfares, rather than dividing up neighborhoods.

Stamps said at the council meeting on June 23 that the practice cuts up some neighborhoods in his ward like the Bel Air community, the Queens and the Westhaven neighborhood.

"Gerrymandering does not do a good service to anyone," he opined. "It has been a problem, and it breaks down representation, more specifically in my ward. If we have a picture of gerrymandering, it will be Ward 4."

"Political gerrymandering is a substantial problem harming representational democracy throughout the United States and within Jackson,” the proposal noted. "Gerrymandering has often been used to disadvantage and harm people of color by minimizing (or negating) their political strength."

It noted that making sure that neighborhoods stay in the same district better serves them rather than have individual communities cut up in the name of districting.

"Be it ordained that the City of Jackson ban gerrymandering and redistrict the city using major thoroughfares to avoid neighborhoods being divided by district lines," the proposal said.

The proposal is up for discussion and vote in the next council meeting on July 7.

The Jackson City Council, on June 23, confirmed the appointment of Steve Davis to the nine-member Jackson Historic Preservation Commission Board. He fills the Ward 1 spot of the commission as a resident and has a three-year term ending June 23, 2023.

The board manages the historical resources of Jackson and advises on the designation of historic landmarks and districts.

Davis, a graduate of the Mississippi State University School of Architecture, has 40 years of experience as an architect, is a principal partner at a Jackson-based architectural firm and is past president of the American Institute of Architects, Mississippi Chapter.

His appointment was confirmed unanimously, with Council President Virgi Lindsay of Ward 7 saying the board is grateful for his volunteerism.

The members of the board serve as unpaid volunteer municipal officials.