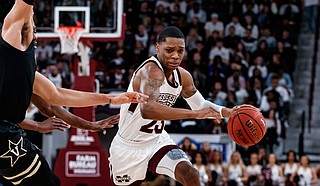 Since the SEC regular season wrapped up on Sunday, March 8, the conference announced the award winners for various conference awards. Mississippi State University made program history when coaches in the conference named senior guard Tyson Carter as SEC Sixth Man of the Year. It is the first time an MSU player has earned the sixth man award in the long and distinguished history of Bulldog basketball.

Carter is enjoying his best season overall as a Bulldog as he is averaging 13.9 points, 3.1 assists, 2.6 rebounds and 1.1 steals. He has scored double-digits in 20 of the 31 games he has played in this season. He has scored over 20-plus points in six games this season and 15 times has scored 14 or more points this season.

In his four years with the Bulldogs, Carter has 1,352 career points, which ranks him 19th in program history, and is fourth among active players in the SEC. Carter joins his father, Greg Carter, as the only father-Son tandem in the SEC to score over 1,000 career points.

Carter wasn't the only Bulldog to make history when the conference awards were announced. Sophomore forward Reggie Perry became just the second player in program history to be named SEC Player of the Year.

Perry is the first MSU player to receive the honor since Lawrence Roberts in the 2003-2004 season. The guard was named First-Team All-SEC by the Coaches and the AP and just won the 2019-2020 Howell Trophy as the best men's basketball player at a four-year college or university in the state of Mississippi.

The Bulldogs received a double-bye in the SEC Tournament as the fourth seed. Further games have been cancelled until March 30 in the wake of the COVID-19 crisis.