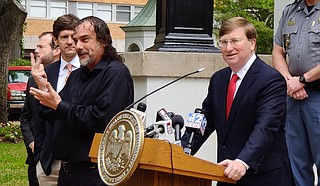 Today, Governor Tate Reeves signed a new executive order to further ramp up the state's efforts to protect the health of Mississippians during the outbreak of COVID-19. Photo courtesy State of Mississippi

Gov. Tate Reeves signed an executive order early this evening superseding a patchwork of local bans on public gatherings in Mississippi and other heightened restrictions that several municipalities across the state have ordered or considered in the wake of COVID-19’s spread inside Mississippi. The state reached 320 official cases today, up 300 percent since 80 known cases on Friday.

The order seems to declare that most types of businesses in Mississippi are "essential" and thus exempt from social-distancing requirements suggested in the order. "The uninterrupted delivery of essential services and functions is vital to infrastructure viability, critical to maintain continuity of functions critical to public health and safety, as well as economic and national security, and is crucial to community resilience, continuity of essential functions and to promote the security and safety of Mississippi residents even as the nation limits human interaction and engages in social distancing," the order stated.

Notably, Reeves' executive order supersedes any orders by local mayors or other governing body in Mississippi that conflict with the businesses and organizations he deems exempt as "essential" businesses.

Reeves' order thus cancels "any order, rule, regulation or action by any governing body, agency or political subdivision of the state that imposes any additional freedom of movement or social distancing limitations on Essential Business or Operation, restricts scope of services or hours of operation of any Essential Business or Operation, or which will or might in any way conflict with or impede the purpose of this Executive Order is suspended and unenforceable during this COVID-19 State of Emergency. However, nothing in this Executive Order shall in any way alter or modify the authority of the Mississippi Emergency Management Agency, the Mississippi Department of Public Safety or of the State Department of Health and the State Health Officer."

The exhaustive list of exempt "essential" businesses includes many industries and institutions both public and private.

Based on a preliminary reading of the executive order tonight, the Jackson Free Press has identified two primary categories of “non-essential” businesses to which the gathering limits might apply. The first is hygiene and fitness providers, including all salons, gyms, tanning services, massage parlors and sporting stores. The second is non-food-service entertainment venues, like movie theaters and bookstores. Some limited retail outlets, including boutique clothing stores and furniture stores, also qualify as non-essential.

The order exempts several broad categories of businesses including department stores, as well as "offices" and any factories or manufacturing operations.

"From the date of this Executive Order until April 17, 2020, Mississippi residents shall avoid social and other non-essential gatherings in groups of more than 10 people where the gatherings [sic] in a single space at the same time where individuals are in close proximity to each other," the order states. "This does not apply to normal operations of locations like airports, medical and healthcare facilities, retail shopping including grocery and department stores, offices, factories and other manufacturing facilities or any Essential Business or Operation as determined by and identified below."

The order also requires restaurants, bars and other dining venues to reduce dine-in services to 10 people at once, or to transition into offering drive-thru, carryout or delivery services. This is a vastly more liberal provision for restaurants than many states have instituted, as well as some towns in Mississippi, which have encouraged restaurants to end dine-in service altogether.

The order states: “From the date of this Executive Order until April 17, 2020, restaurants, bars, or other dining establishments shall suspend dine-in services unless [sic] able to reduce capacity to allow no more than 10 people to be gathered in a single space at the same time where individuals are [sic] in seated or otherwise in close proximity to each other.”

Last week, the owners of Mangia Bene restaurants fully closed their three popular restaurants in Jackson—Bravo!, Broad Street Bakery and Sal & Mookies—saying they saw no way to keep employees safe even if they were offering curb service.

“We have tried to modify our service each day, to meet the public health needs of our community,” co-owner Jeff Good wrote in a public post on Facebook. “We are all believers that the only way to quell the coming storm is to follow the directions of our public health government officials. #flattenthecurve is a real phenomenon that can and will save lives. We get it, and we just didn't see how we could still prepare food and deliver it to you curbside, since by definition we were not practicing any social distancing and had many folks involved in the make, bake and take process.”

Good added: “I just could not see a way where the two could co-exist: serving people as customers and serving the people I work with. Doing one impacted negatively the other.”

Following Trump's Lead 'Not Based on Public Health'

Reeves' executive order makes it clear that he is, eight days later, following the lead of President Donald Trump's March 16 call for "Americans to slow the spread of COVID-19 over a 15 day period by avoiding social gatherings in groups of more than 10 people, using drive-thru, pickup, or delivery options at restaurants and bars, and avoiding visitation at nursing homes, among other steps."

In his press conference earlier today, Reeves said he had been in contact with Vice President Mike Pence and planned to follow the lead of "experts" in his executive orders. Trump has caused controversy in recent days by declaring that he wanted social distancing to end by Easter to get people back to work in order to help business and the economy. Trump's plan has drawn criticism and warnings from many public-health and pandemic experts.

“Everybody living through this wants to not be in this situation,” Jen Kates, director of global health and HIV policy at the Kaiser Family Foundation, told Vox today. “But the call to end it soon—and saying that’s his intention—is not based on public health. There’s nothing to suggest that ending it soon will have any good impact at all.”

Some Republicans, such as Texas Lt. Gov. Dan Patrick are even saying that grandparents are telling him that they are willing to sacrifice their lives to help save the economy for their grandchildren.

The Mississippi governor's order formalizes hospital and care-facility restrictions on visitors, except for the provision of critical assistance or end-of-life care. The order allows for health-care facilities or supervising health-care providers to circumvent this restriction if the visit is not deemed a risk to facility staff or residents.

How the governor plans to enforce Tuesday night’s executive order are not clear at this time, as there are no enforcement provisions in the executive order. Other states have threatened to charge violators of executive orders during official states of emergency with misdemeanors, some with the potential for jail time. At a press conference on the steps of the governor’s mansion earlier today, Reeves declined to specify if his orders would carry the weight of arrest and prosecution.

One of the immediate consequences of Reeves’ order is the formal declaration that most of Mississippi’s businesses qualify under it as "essential," and thus are exempt from restrictions on public gatherings. As of press time, the Jackson Free Press has received reports from businesses in the Jackson area that have, as of today’s executive order, scuttled plans for work-from-home and ordered their employees back to work on-site.

Also included among essential services in the executive order were religious facilities, just days after the Mississippi State Department of Health told Mississippians to skip churches, weddings and funerals to help slow the spread of COVID-19.

"Religious entities including religious and faith-based facilities, entities and groups, religious gatherings provided that they adhere to the CDC and the Mississippi Department of Health recommendations and guidance to prevent the spread of COVID-19," the order stated.

Donna Ladd contributed to this report. Read the JFP’s coverage of COVID-19 at jacksonfreepress.com/covid19. Get more details on preventive measures here. Read about announced closings and delays in Mississippi here. Read MEMA’s advice for a COVID-19 preparedness kit here.