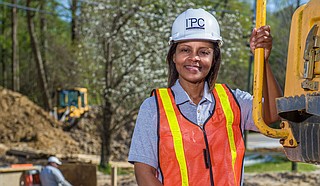 The Small Business Association named Vera Hall, owner of Innovative Performance Construction Company LLC in Jackson, as the 2020 SBA Mississippi Small-Business Person of the Year during an SBA meeting in March. James Bennett, director of the Small Business Development Center in Raymond, Miss., nominated Hall for the award based on her efforts to promote growth and stability at her company, Hall told the Jackson Free Press.

"When Innovative Performance first started in 2011, we were doing only one contract a year," Hall says. "Now, come 2019 and 2020, we are doing multiple contracts simultaneously and have been recognized and certified by the SBA."

Hall says that a key to growing her business and acquiring new contracts was securing bonding and financial lending through the state SBA, as well as getting Innovative Performance certified for the U.S. SBA's 8(a) program in November 2015. The 8(a) program is a certification that helps small businesses gain bid opportunities for government contracts.

Born in Fayette, Miss, Hall graduated from Jefferson County High School and enrolled at Alcorn State University, where she received a bachelor's degree in agricultural business management in 1997. She later received a master's degree in the same subject from Alcorn in 1998 and enrolled in a doctorate program in agricultural science at Louisiana State University that same year. Shortly after she began the program. However, Hall's father, I.P. Hall, became ill, and she returned to Fayette to care for him. He died shortly afterward. Following her father's death, Hall changed course and decided to enter theological school at Emory University in Atlanta, Ga., rather than return to LSU.

"During my time with my father, seeing his life, I had an epiphany that it was time to get to know God," Hall says. "I felt that enrolling at Emory would help with that and provide a way to move forward past the grief."

Hall received her master of divinity degree from Emory University in 2005 and began working in Alcorn's campus ministry service after graduating. That same year, she got married and began helping her former husband with his painting company, which Hall says grew from making roughly $40,000 per year to over $1 million. Hall and her husband divorced in 2008, and a judge gave her ex-husband the business. Having come to feel a passion for construction and working on houses, Hall says the loss of the business inspired her to start her own, leading to her opening Innovative Performance in 2011.

"While I was studying agricultural sciences in college, we'd learn about trade work and building things like screen doors for grades," Hall says. "However, it was on weekends when I would come home from college and help paint people's houses that I started realizing I had a love for that. I only truly realized just how much after it was taken away."

She lives in Fayette with her 11-year-old daughter, Christian Haley.