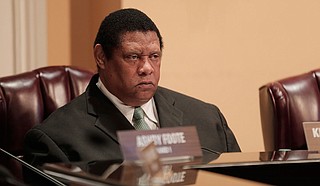 Ward 3 Councilman Kenneth Stokes (pictured) led the effort for the City of Jackson to offer a $2,500 award for the arrest and conviction of those who killed 5-year-old Qeenyanna Davis on April 15. Mayor Chokwe A. Lumumba approached the business community about adding another $10,000 to it. File Photo by Imani Khayyam 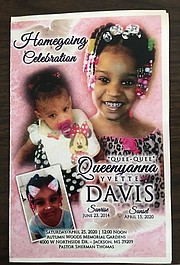 It was just before 9:30 p.m. on April 15 in an apartment complex in the 1200 block of Wood Village Drive when 5-year-old Qeenyanna Davis was struck by gunfire, along with three adults, as her mother was there visiting her sister. The shots came from outside the Wood Village apartment. The child succumbed to her injuries at the hospital, but police to date have not apprehended suspects. JPD later said the adults' injuries were not life-threatening.

At its meeting last week, the Jackson City Council voted unanimously to offer a total of $12,500 as a reward for anyone who comes forward with information leading to the arrest and conviction of those responsible for Qeenyanna’s murder. The City is providing $2,500, and $10,000 is coming from the business community.

At the meeting, Ward 3 Councilman Kenneth Stokes, who brought forth the proposal, lamented the killing and said the money sends the message that the City will not tolerate baby killers.

Stokes said that it was regrettable that the killer is still free weeks after perpetrating the crime.

At the council meeting, Lumumba announced that the business community had raised $10,000 for information leading to the apprehension of the culprit.

Lumumba said he had concerns about where the reward would come from after a conversation with the City’s director of administration, prompting him to reach out to the business community.

"The checks are made to the Chamber (of Commerce), and the moment that someone comes forward, that check can be made payable to them,” Lumumba said. The reward is contingent upon both arrest and conviction.

To further anonymize the process, the mayor said he had a conversation with one of the board members of Crime Stoppers about disbursing the money.

Crime Stoppers is a Division of the Mississippi Department of Public Safety, which provides anonymity to citizens who call its tip line with information regarding crimes.

"I talked to the police department," Lumumba said, "and they said $10,000 is more than enough incentive."

Only weeks before young Davis died, 11-year-old Jordan McCoy was killed from gunfire while sleeping in his home on Forest Avenue.

"We're becoming known as the child-killing capital," Stokes said last month after the killing. "Not the capital of the state of Mississippi. Another child, another mother, another family, without their loved ones because of ignorance."

In a statement after Davis’ killing, Lumumba said: "I mourn the death of every innocent life. It is especially heartbreaking when lives are taken due to senseless violence. We must develop better ways of resolving conflict than resorting to acts of violence. The permanent outcome to these temporary disagreements is beyond devastating."

While Jackson Police stated that the child succumbed to her injuries at the hospital, the victim’s aunt, Lukeltha Davis, told the Jackson Free Press that after two adults who were shot had been taken to the hospital, it was only one-and-a-half hours later that an ambulance came for her niece, saying that she bled to death in her house.

She said her children are now afraid to stay in her apartment and have moved out to stay with friends.

Anyone with information about the child’s shooting should call Crime Stoppers at 601-355-TIPS (8477).

Correction: Due to an editing error, the original story indicated in one place that the child died in the apartment, rather than in the hospital. We have also updated the story to indicate that the adults' wounds were non-life-threatening.