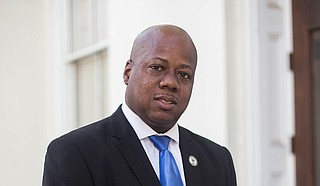 With Joe Biden and Kamala Harris projected as the winners of the Nov. 3 U.S. presidential election, members of the Jackson City Council Tuesday congratulated them and urged for unity as the country moves forward.

Ward 5 Councilman and Council Vice President Charles H. Tillman said the ticket is unique because Biden is an experienced leader and Harris is making history, and called for the country to rally around the new leadership.

"On Saturday morning, it was announced that the Democratic ticket of Joe Biden and Kamala Harris had apparently won the presidency," he said. "This is a unique ticket in that it has on it the first lady to be proudly elected as vice president of the United States."

"I’d like to join Mr. Tillman's opening and his prayer for us to move forward as we put our country back together and be less divisive and be more productive for all Americans," he said.

Council President and Ward 6 Councilman Aaron Banks opened and closed the meeting in honor of Biden and Harris.

"I will like to take the opportunity to acknowledge, and open and close this meeting in honor of congratulating President-elect Joe Biden and our Vice President Kamala Harris on their victory on winning their nomination to the presidency, which will start on January 20," he said. "Hopefully, regardless of the division in our country, we can all get together and support Mr. President and (Ms.) Vice President."

The council approved an order Tuesday authorizing the mayor to enter a memorandum of understanding between the City, Hope Enterprise Corp., Goldman Sachs Bank and Goldman Sachs foundation.

Chief Administrative Officer Robert Blaine said that the program is meant to drive commercial growth. "It's focused on access to capital for businesses of color in the city," he said. "It is also an education program in order to be able to spur economic development in Black businesses, in Black entrepreneurship in the city of jackson.

“This is a partnership between several different cities across the South, and Goldman Sachs have put forth a very large investment of over $5 billion to the fund."

Mayor Chokwe A. Lumumba said the program is the right move because of the large population of Black people in the community—85%.

The council also approved the acceptance of $4 million in COVID-19 relief funds for personnel expenses related to the pandemic from the Mississippi Emergency Relief Fund Program Tuesday.