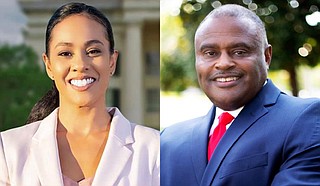 After none of the Ward 2 special election candidates drew a majority of votes yesterday, the two with the highest number, Angelique Lee and Tyrone Lewis, will compete in the Dec. 8 runoff. Photo courtesy Angelique Lee, Tyrone Lewis

Angelique Lee, currently studying for a Ph.D. in community development at Jackson State University, led the pack but fell short of outright winning the race with more than 40% of votes cast for her, totaling 1,209. Tyrone Lewis, a former one-term Hinds County sheriff, followed her with 31.57%—950 votes. The duo will face off in the special runoff election on Dec. 8.

The seat became vacant after Melvin V. Priester Jr. resigned in October to focus on his law practice after seven years representing Ward 2 at the city council.

"You can go from Pocahontas to the Madison County side, and you can get service, but the closer you come to Hinds County, that service dies," he said, describing his experience. "And I was trying to figure out how in the world that this is taking place and we are the capital county. We ought to get more service than anybody. Madison County is more rural in that particular area than it is in Hinds County."

"Because of COVID-19, children in that area cannot go to school," he added. "They have to leave home to go to the area where they can get on the internet.

"And I think that we are being overlooked here in Hinds county, and I think this board ought to make a concerted effort to make sure that we are represented when it comes to broadband; I think it's only fair, and there is not enough being done."

Archie also commented on the video released Nov. 7 showing a Ridgeland police officer dropping off a homeless person in his district. He said that such a practice is reprehensible, and the county needs to send a strong message to the surrounding municipalities.

"How is it that you continue to choose Jackson, to cross the line to another city, to another county to drop individuals not wanted in Madison, or wanted in Ridgeland," he said. "What about all of those being brought downtown to the bus station, from different cities and different counties?

"The police department, as well as the sheriff department, we must do what we have to do, Archie added. “Let's not let this thing get out of control till we cannot do anything about it. So I am asking that this city and this county come together and have a comprehensive plan."

Archie said other jurisdictions bring people into the county and are adding to the issues that it is dealing with.

"(We should) send a clear message to the surrounding towns, counties and the surrounding cities, that we don't want you bringing people into Hinds County and the city, drop them off because you don't want to deal with the issue," the supervisor said.