PUBLISHER'S NOTE: A Mask Mandate is Support for Small Business 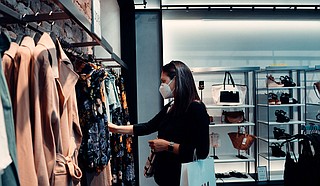 Last weekend, Donna Ladd was honored as the "Survivor of the Year" by the Susan G. Komen Foundation of Mississippi after her breast cancer battle these past two years. The group threw a "virtual parade" at Smith-Wills Stadium (real cars and people, but mostly Facebook Live fans), which meant decorating my car so she could ride along and give her homecoming-queen wave for the cameras.

The day before, I was pushing the door open at Party City in Ridgeland to pick up balloons for the car when I read their sign that said "Mask Required—By Order of the Governor," (or words to that effect), and it occurred to me that the sign was no longer accurate.

It was Friday, Oct. 2, and the same week Gov. Tate Reeves rescinded his statewide mask mandate. Ironically, it was also the same day that the Marines airlifted one of the country's leading anti-mask propagandists, Donald Trump, to Walter Reed hospital after he contracted COVID-19. (He, of course, blamed military families for his infection.)

We've heard it over and over again. Masks are the best defense against the spread of the virus. They're about helping other people as much as about helping yourself, especially cloth and non-medical masks. A team at the University of California San Francisco recently published a paper theorizing that masks might help the wearer develop an  immune response because if they inhale less of the virus, they may still contract it, but remain asymptomatic.

But what occurred to me when I saw that sign is that a mask mandate is pro-business. With a statewide mask mandate in place, small businesses had the advantage of being able to point to leadership in the state while protecting their clientele and employees from the spread of the virus. Without it, small businesses are forced to make the decision themselves and then enforce it—all without the clout and certainty that comes from a mandate.

Nothing has changed about the  virus or its infectious nature. Today, a Mississippi State Department of Health showed 713 new cases of COVID-19 and 14 deaths. These numbers aren't the highest they've been. But they're high.

I believe the reason the governor lifted the mask mandate is threefold.

One, he lives in an echo chamber that says it's "unconstitutional" to require masks in public accommodations, which is ridiculous. The Supreme Court case Jacobson v. Massachusetts and many state-level decisions have found that the government has emergency powers to address a public-health crisis, with remedies considerably more invasive than requiring protective clothing in public.

Two, Reeves is just watching the hospital numbers. I think it's a cynical leader who looks at it that way. By relaxing the mask mandate, he seems to say he's OK with more people getting sick because of his politics as long as there are beds and ventilators available. Presumably, if hospitals are overwhelmed again as they were in August, he'll alter course.

If you were doing this with your bank account, it would be called "living paycheck to paycheck." That's being reactionary, not being a leader.

Third, he's following Trump around like a puppy. Trump's anti-mask crusade doesn't do Americans—or governors—any favors. I'd suggest getting off that bandwagon.

Masks are a critical public-health tool during this pandemic. Reeves himself encourages them, although he's afraid to require them. But doing so would help on three different levels.

First, when there's a mandate, it's easy for everyone to know the rules. Signs in the business' window, billboards on the interstate. Simple and effective.

Second, businesses can point to the mandate to support their customers and staff. Instead of forcing them to take on every Karen and Karl on their own, the mandate supports local and small business with clear rules for navigating their role—and staying afloat—during the pandemic.

This is particularly important in Mississippi, because a higher percentage of people are dying in Mississippi from COVID-19 complications, probably due to our population's relative unhealthiness and our health-care system's inadequacy and disparities. Instead of more of that same old Aw-Shucks-Mississippi-is-50th thinking, our vulnerability makes a mandate that much more essential.

WJTV reports that today, about 10 days after Reeves lifted the mask mandate, we're back up to 80% capacity in our hospital's ICUs.

The solution is simple. Reeves should reinstate the mask mandate and tell people it isn't going anywhere until the pandemic is really over. Not piecemeal, not half-baked, not trying to track "hotspots" when the State doesn't have anything near the contract-tracing capacity that it should.

What about "mah rites"? They're  intact. When you go outside, they can arrest you for not wearing pants or a skirt, right? For now, during a pandemic, the government can direct you to cover your nose and mouth when you're inside places of public accommodation, too. You'll need to overturn Jacobson to change that.

Let's make this happen. Wear your MAGA mask if it helps, governor. Stick with science and put some teeth in your public-health messaging.

If you can't do it to save lives in Mississippi, Gov. Reeves, then do it to support small and local businesses. Give business owners and managers tools they need to be part of the fight against the coronavirus on an equal playing field.

A state mask mandate is support for business owners. Put it back in place.

Todd Stauffer is president, publisher and co-owner of the Jackson Free Press.