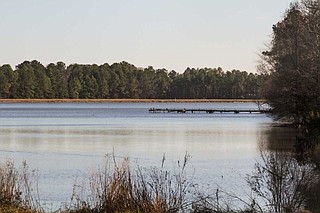 Power company Entergy will end its lease of Lake Hico as a cooling pond at the end of the month. File Photo by Stephen Wilson

JPS organized a virtual town hall meeting on Zoom, which brought together Jackson citizens as a first step in figuring out the lake's future, with the need for an advisory committee stressed.

The end of Entergy's lease means the district loses more than $300,000 a year which is its highest 16th-section income. The Mississippi Secretary of State manages 16th-section lands leased to generate funds for the state's school districts.

"Entergy has held a lease with them for the past 30 years," Greene said. "They indicated to us that they do not intend to extend that lease. As much as we hate to lose them as a tenant, this does provide for us a wonderful opportunity to rethink the use of Lake Hico."

"There is a lot of history and a lot of context around Lake Hico," he added. "It is very important to us as a school district."

In Lake Hico’s early history, which predated the opening of the Ross Barnett reservoir, it was a popular lake and park for boating and other recreation and was the home of the Jackson Yacht Club—but it was segregated with only white people allowed to use the lake and park. The name “Hico” came from combining “Hinds” and “County.”

Aliyah Veal of the Mississippi Free Press reported that in the 1960s, in the midst of the Civil Rights Movement calling for integration of all public facilities, the yacht club moved to the new reservoir in Madison County, and the then-white-led City of Jackson closed the lake in 1969, as well as public swimming pools, to avoid integrating them. It closed the park in 1975 for the same reason, but it is now reopened.

It took a lawsuit by Jackson mother and civil-rights activist Flonzie Brown-Wright for her then-14-year-old son to be allowed to play softball in the until-then segregated park. Now, a walking trail is named for her son Edward Goodlow Jr., who died in 2014. The late Mayor Chokwe Lumumba led the naming of the trail in Goodloe’s honor.

Creating the ‘Wow Factor’ and a ‘Jewel for the City’

The Mississippi Department of Environmental Quality granted Entergy the permit to use the lake as a cooling pond—it is now known to be hazardous to use for recreation—and it requires a new permit for any other use.

The superintendent said that he hopes that the next phase for the lake will be great.

"We certainly as a school district want to create the wow factor, the wow experience for those living immediately around the lake, and again for the city and beyond it," he said. “It does everyone justice, benefits everyone to the extent that we can create something at Lake Hico that is a jewel for the city, and I certainly see an opportunity for it here."

Possible future uses mentioned at the town hall include for a housing development, retail facilities, entertainment projects, a water park, water sports, solar field or a lake. The project needs the community's buy-in and expertise, necessitating an advisory committee's formation.

"We definitely want and need help to make sure that we create something that the community actually wants, that the community will be proud of, in the city and in the neighbourhoods just outside of Lake Hico and that property," Greene said. "We would likely need someone who has done this kind of work to lead us through that exploration, to get some professional support around development and land use and all sorts of things."

“These are the kinds of things that we are going to need help exploring to get to the thing that really resonates with our community, benefits our community most,” he added.

Suggestions at the meeting include having the committee consist of Jackson residents who will bring in property developers and identify government, quasi-government, and private developmental partners. It will include those living around the lake, with at least one person with an environmental background. They will develop a project timeline and map out a financial plan.

Mayor Chokwe A Lumumba, who was at the meeting, highlighted the importance of the lake.

"What we have in the short term are significant decisions to make," Lumumba added. "I think that if we can develop a plan and the community is in lockstep with the plan, in the long term, not so distant future, there is an immense opportunity."