Shower Power, ‘Loving the Homeless Back to Life’ 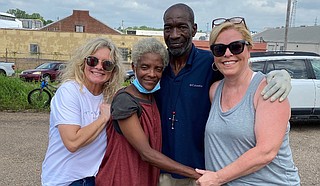 On Fridays, the festivities begin at 7 a.m. at 836 S. Commerce St. in downtown Jackson. Around 60 people gather, Flowood resident Teresa Renkenberger says, to sing, dance, have lunch, get some new clothes and most of all, to take showers—as organized through Shower Power, a nonprofit that Renkenberger founded and debuted in November 2019.

Most of the attendees are homeless, as are some of the volunteers who help make sure the program runs smoothly.

"We send everyone away with snacks to last until we see 'em again," Renkenberger says.

The realtor and mother of two came up with the idea of converting a food truck into showers for the homeless while she was having a conversation with a homeless friend. Renkenberger asked her friend how long it had been since he had a real shower, and she was stunned when he answered "a year."

"I tried to look normal, but in my mind I was like, 'Oh my gosh. I have to do something,'" Renkenberger recalls.

After talking the idea over with her husband, she searched for a used food truck for sale, eventually finding one that Kevin Poe was selling, and he offered to convert the vehicle into showers for the nonprofit to use. He has since become one of the organization's volunteers. Bruce Wood from JH&H Architects and his wife, Jeannie, designed the interior of the truck free of charge.

"It's been very humbling, and it has certainly turned into way more than I just ever thought," Renkenberger says. "When I started, I thought that I was doing it for one person, and then it turned into all these other people, which I'm so thankful for."

A lifelong resident of the Jackson area, Renkenberger attended Northwest Rankin High School and later graduated from Belhaven University. She has worked as a realtor for almost 18 years now.

"On our first day open, we had to go find people. I know this sounds selfish, but I felt like nobody was coming to my birthday party. Howard Ballou was there with his news crew, and they were waiting," Renkenberger recalls. "One of the volunteers got into her truck and left saying she was going to find some (people in need), and she came back with three. They were so happy. They lived in the woods. They hadn't had a shower in forever. Each of the three stayed in the shower for 45 minutes."

At one point in her life, Renkenberger and her mother fell on hard times that nearly would have left them homeless had it not been for the kindness of others. Since then, she has kept the downtrodden close to her heart.

"I've always been in rescue mode. I rescue animals. If I hear of somebody who needs something I try to go and save them. If I only have a dollar, I will really give you 50 cents. Even if I needed that 50 cents," she says. "My momma taught me to share. I try to be compassionate and understanding and know that I'm blessed now."

Renkenberger overheard one of her volunteers, Mary Anne Kirby, describing the work of Shower Power: "We're loving them back to life." Renkenberger adds, "And that's what we're doing. ... When they come to us, a lot of them won't look at us, but after (they shower), they look at us and feel important."

When one of the homeless citizens asked her, "Why do you do this?" another homeless attendee answered on her behalf, saying, "Because God is in her heart. She doesn't push anything on us, but she is showing us who she is and who she believes in."

"I couldn't even talk and was crying," Renkenberger says about hearing the gracious response.

As for the future of Shower Power, Renkenberger plans to buy some washers and dryers for their "Shower Power Friends" to use, a suggestion she obtained after asking the homeless people who used their services what else they needed, to which many replied with "clean clothes."

Showers are free to use every Friday from 7 a.m. until the last person leaves. Shower Power is set up at 836 S. Commerce St. To learn more, visit showerpower.ms or find the nonprofit on Facebook.