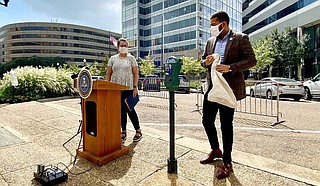 Mayor Chokwe A. Lumumba unveils one of the parking meters on North Lamar Street on Tuesday as Director of Planning and Development Jordan Hillman looks on. Photo courtesy City of Jackson

From a height of $500,000 years before, parking-meter earnings plummeted to $50,000 last year, but the City expects not less than $200,000 income with the new meters, Director of Planning and Development Jordan Hillman revealed at the press conference.

"It is basically to be reinvested into the meter system until it becomes sustainable," she said.

Hillman said it will likely take five years for the new meters to fully pay off.

"Once the meter revenue reaches a sustainable area, and we actually have a little profit, that revenue is intended to go back into (making) sidewalk improvement, landscaping improvements, (Americans with Disabilities Act) ramps, those sort of things, over time," the director said. "So it is a long-term project, but the meter system can be sustainable and should be sustainable."

An addition of 900 parking meters will completely overhaul the system. They are compatible with both coins and credit cards and are operable via ParkMobile, an app the City will set up in six weeks, which will also help holders see available parking spots and add time remotely. It will cost 25 cents per transaction to use a credit card.

Mayor Chokwe A. Lumumba touted the project as a leap forward in the development of the city.

"(This) is also a sign, a symbol of the forward direction that we are taking the city," he said. "It is bringing us into the 21st century."

Other features of the system include a sensor that allows for remote monitoring of parking spaces. "That sensor makes us know in real-time whether there is a car there and whether (the owner) has paid," Hillman said. "(The) meter technicians can get real-time alerts into their phones and their emails."

"(The meters) will display the enforcement hours on the screen," she added.

The new meters have new rates: $1 an hour for the first two hours, $3 for the third hour and $4 for the fourth and each additional hour, to discourage people from parking for long and to use the garages instead.

"It is cheaper to spend the day in some of our parking garages," Hillman noted. "Parking meters are (for) short-term quick turnover."

The enforcement system is more efficient as well. "Our enforcement officers, over the next few weeks, will be equipped with tablets that will direct them to meters that are in violation," Hillman said. "This is one of our biggest improvements right now."

"There will be a license-plate reader within their technology," she added. "So all they have to do is scan the license plate and the ticket will automatically generate."

Hillman said the parking system's decline began in 2003 when budget constraints led to cuts in the number of enforcement officers and meter-maintenance efforts.

The Jackson City Council has authorized $12,000 in a matching grant to Stewpot Community Services to staff The Opportunity Center for the homeless when the temperature drops below 35°F for the 2020-2021 fiscal year.

Stewpot operates the center at 845 W. Amite St. as a day shelter but will sign an agreement with the City of Jackson to staff the facility during severe cold weather.

The center will open to accommodate the overflow population.

Stewpot Community Services started operation in 1981 and serves the homeless.

"We are a nonprofit organization that gently assists the homeless with necessities such as food, clothing and shelter," Director of Special Events and Communication Michelle Bingham told the Jackson Free Press in her office. "We have a day shelter that does resumés, provides a way for our clients to wash their clothes, and take showers."

Apart from money from the City, the organization also gets funding from other sources.

"Most of our donations are from individuals and congregations and businesses in the area," Bingham said. "Most of the people that know about Stewpot, they've been here, they are excited about what we do. They are interested in what we do, and they want to help and be a part of what we do."

The council on Tuesday also authorized $15,000 in contributions to two art groups. The Mississippi Symphony Orchestra and USA International Ballet Competition get $7,500 each.

"The governing authorities of the City of Jackson budgeted funds for the 2019-2020 fiscal year for the promotion and development of art," the order said. "The budgeted funds are subject to be allocated on a competitive basis."